A Sony device that goes by the model name D5103, believed to be the upcoming Sony Xperia G, has popped up on Indonesian POSTEL website (the country's FCC equivalent).

The leaked listing doesn't show much aside from the model name and the fact the device is made in China, which shouldn't come as a surprise. However the leak does give credibility to rumors of the Xperia G's existence. 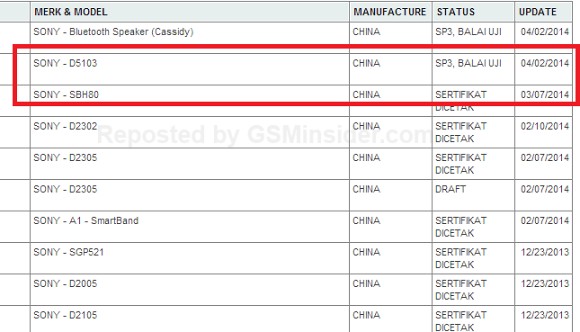 The D5103 Xperia G was spotted on GFXBench's database with a 720p screen. There have also been two sightings of the device in the wild both on February 14.

The Xperia G isn't expected to carry IP certification for extra water resistance, but it should allow cheap memory expansion via a microSD card slot.

oh well, another impatient customer. sony has announced kitkat update for your phone in the middle of Q2, so wait until may or june