This just in - Sony Ericsson announced the XPERIA Neo and the XPERIA Pro. The XPERIA Play was uncovered too, specs and all. The Neo and the Pro are like smaller-screen versions of the Arc but the Pro adds a QWERTY keyboard to the mix.

As expected, the XPERIA Play has slide-out game controls and also a touch-sensitive areas. The CPU is a 1GHz Snapdragon. The Play packs a latest Adreno GPU, which will provide 60fps gameplay in 3D games.

The Sony Ericsson XPERIA Play is the first PlayStation Certified device and will have access to content from publishers like Sony Computer Entertainment, Electronic Arts, Gameloft, Namco and more.

The XPERIA Play will be available in March first. Interestingly, Sony Ericsson has scored a deal with Verizon US, which will start selling the Play in April.

Check out this new ad for the Play:

The Sony Ericsson XPERIA Neo is much like the XPERIA Arc. It features a smaller 3.7" FWVGA display, but it's again dubbed as Reality Display with Bravia Mobile engine. It's covered with a scratch-resistant surface so it won't lose its luster.

The XPERIA Neo camera is an 8MP Exmor R unit capable of HD video recording. The onboard HDMI port can be used to display what you've captured on a big HDTV display (or you could use DLNA to do the same wirelessly).

The Neo is even powered by the same single-core 1GHz Qualcomm MSM8255 Snapdragon processor as the Arc and runs Android 2.3 Gingerbread.

The Sony Ericsson XPERIA Neo measures 116x57x13mm and weighs 126 grams. An 8GB microSD card will be in the box.

The Sony Ericsson XPERIA Pro is to the Neo like the X10 mini pro was to the X10 mini. It's a QWERTY droid with 3.7" FWVGA Reality Display (scratch-resistant too), 1GHz Snapdragon (MSM8255 again).

The XPERIA Pro has a slide-out four row QWERTY keyboard but it's actually not much bigger than the Neo. It measures 120x57x13.5 and weighs 140 grams. There will be an Office document editor out of the box to really make that keyboard useful. 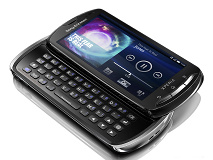 The similarities continue - the Sony Ericsson XPERIA Pro uses an Exmor R sensor (probably 8MP but that is not confirmed yet), it has an HDMI port, DLNA and an 8GB microSD card.

IMO dual core wasnt necessary on a smartphone, like a SE approachment releasing just a single processor was enough to handle all of the mobile apps, i know dual core were fast but then its just a processor, why would you need a mobile phone that requ...

well it's too late for xperia pro to be released at the end of Q2 considering its specs. i hope it will be a dual-core processor when it's released in the market...

is this really the price? O.o