Sony Ericsson just announced a new Facebook competition searching phone reviewers among you. The most interesting thing about it is it shows two new touch feature phones - the txt pro and the Mix Walkman.

To enter the competition you have to answer a question and write in 50 words or less why you should be chosen. The question is interesting – you have to pick one of three options for the names of the two phones. And since only one answer seems reasonable, there you have it, meet the Sony Ericsson txt pro and the Mix Walkman phone. 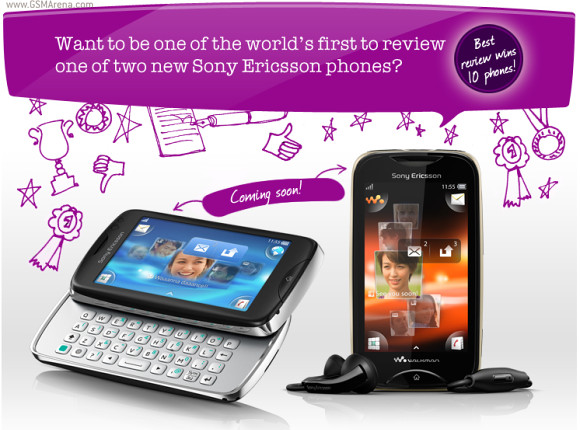 The Sony Ericsson Mix Walkman phone looks almost exactly like the WT18i (a China-only model), so we might be seeing similar specs. That might mean an 800MHz CPU, 3.2” HVGA screen, 3MP camera with VGA@24fps video capture.

As for the Sony Ericsson txt pro, we thought we were looking at the Xperia mini pro for a moment there but Sony Ericsson’s blog post explicitly says the two are feature phones. The txt pro and Mix look quite alike so we’d wager a guess and say they have similar specs.

Anyway, back to the Facebook competition – to participate, sign up by the end of the month and you can be one of 12 people who will receive one of the two new phones (before Sony Ericsson has fully announced their specs) and you will be asked to do a 45 second video review.

Four of the twelve videos will be selected and posted on Facebook on 7 June. The one that gets the most likes will be declared the winner on 13 June. What you’re competing for (besides some serious bragging rights) is the grand prize.

The grand prize is “a set of 10 more for their family and friends” and I think the missing word here is “phone”, most likely the same model you got to review.

If you’re interested, sign up here and you’ll know if your one of the select few by the end of the month.

there r so many features