Sony Ericsson unveiled their latest high-end slider - the G705. Loaded with a bunch of goodies such as a large 2.4-inch QVGA display, GPS receiver with A-GPS support and Wi-Fi connectivity with DLNA certification it surely looks like a sweet device. We already covered the device back in July, when live pics of a prototype leaked online. 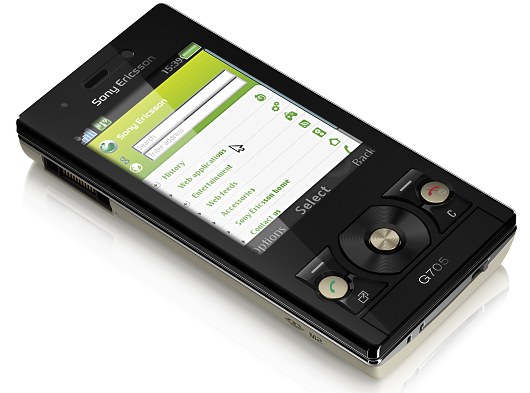 The web-oriented Sony Ericsson G705 packs quad-band GSM support and either UMTS 2100 Mhz with HSDPA or UMTS 850/1900/2100 with both HSDPA and HSUPA. From the looks of it, the second option dubbed "US version" sounds that much better.

Thanks to the built-in accelerometer, the G705 offers auto screen rotation that works even in the browser (which is further enhanced by the dedicated web shortcuts).

The built-in GPS works in cooperation with the preinstalled Google Maps and Wayfinder (with three-month free navigation license) and additionally offers image geotagging. The G705 sports a 3 megapixel camera with LED flash, which unfortunately doesn't have auto focus on board (now that's a big downer). A certain novelty is that the videos captured by the camera can now be uploaded directly to YouTube. YouTube downloads will also be possible and Sony Ericsson will be releasing other YouTube-enabled handsets in the future.

Today for the first time Sony Ericsson also release a UMA-enabled handset - that would be the Sony Ericsson G705u - a version that is made exclusively for Orange and allows for seamless calls handover between the carrier network and wireless Wi-Fi networks.

The Sony Ericsson G705 will be available in Silky Gold or Majestic Black (Luminous Black for G705u) in the early Q4.

can I upload java application(J2me) ?

Hey The Mojo, can you tell us more about the messaging implementation? What's the video resolution? Does the browser support flash?...Thanks. Lately, SE phones are no match spec-wise to other manufactures but on the other hand they're nice looking,...