We just spotted some new info, pictures and camera samples from a brand new Sony Ericsson smartphone - the MT15 codenamed Hallon plus the previously leaked LT15 Anzu a.k.a. XPERIA X12.

Sony Ericsson MT15 Hallon looks much like the XPERIA X12 Anzu, but has a beefier front-facing camera. 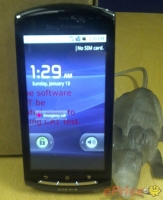 The Hallon leaked via a Picasa album and is shot with a device called Sony Ericsson LT15. Rumor has it that the LT15 is the previously leaked XPERIA X12 Anzu and it's supposed to pack a 12 megapixel camera. The samples in the Picasa album are only 8 megapixel so it's not the full resolution of the camera or the LT15 could be a new unannounced device and not the 12 megapixel Anzu we are waiting for.

As you probably know Sony Ericsson has already reserved several new marketing names - the XPERIA Arc, the XPERIA Duo and the XPERIA Neo. Perhaps one of those will be how the LT15 will become known to the world. I guess we'll learn first-hand at the MWC 2011.

Anyway, here is the Sony Ericsson MT15 Hallon shot with the camera of the LT15:

And these are some camera samples from the MT15 Hallon itself:

Both LT15 and MT15 are most probably running Android v2.3 Gingerbread.

There is one more thing. The long rumored Sony Ericsson PlayStation phone, codenamed Zeus, is supposed to go by the R800 model number so those two don't have anything to do with it even though they look similar.

He might have stolen it from the test labs ;)

Why does everybody think the Anzu will have a 12mp camera? It won't, 8 is the max resolution! Hallon is kinda sweet too, with HDMI exit.