The Sony Ericsson Satio comes with the Walkman music player and all the accompanying extras and eye-candy. Much like the rest of the media menu, the accelerometer is used here for automatic rotation of the display.

Naturally the music player also offers step-by-step filtering of the tracks you want to listen to. The "Now playing" screen is simple but offers all the needed controls and information. The tracks are controlled by comfortably large and thumbable on-screen keys at the bottom.

Strangely enough, the Satio offered neither equalizers nor alternative visualizations.

The video player on the Sony Ericsson Satio has pretty limited functionality compared to the one found on the company's features phones. It has neither slow-mo playback nor screenshot capabilities.

Our real grudge with the video player however is that there's no DivX and XviD support - what can we say, LG and Samsung handsets have definitely spoiled us.

With the missing support for the extremely popular codecs, either you'll have to buy a new application for video playback or you'll have to convert all your videos by using MediaGo (with all the imposed limitations).

The video player could have used DivX support

When it comes to the watching experience itself, the Satio is nothing short of flawless. High resolution, excellent image quality and 16:9 aspect ratio make for a really nice video combo indeed.

Update Nov 10: As it turned out the Sony Ericsson Satio had some issues with our testing equipment, which prevented it from demonstrating its full potential. Now that we have those issues solved we are able to give you a more accurate representation of the Satio audio output.

The handset performs extremely well in this department, the cut-off extreme bass frequencies being the only slight shortfall. However the frequency response is excellent for the rest of the audible range so we are willing to let that one go.

All of the other readings are pretty good too with the distortion levels simply great. The stereo crosstalk, the noise level and the dynamic range are also pretty good. You can see for yourselves that the Sony Ericsson Satio is quite a gifted musician from the table below. 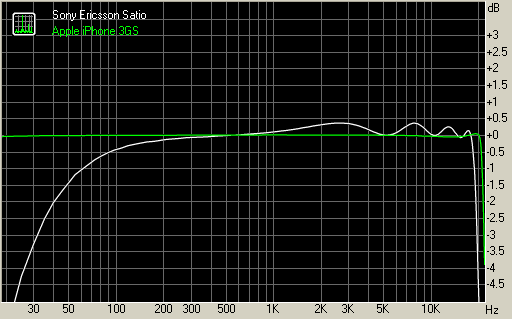