The Walkman series is not dead - in fact with two new phones that were just announced it's as alive as ever. Meet the Sony Ericsson Spiro and Zylo. Both are sliders with excellent sound and social networking integration to cater to the younger crowd.

The Sony Ericsson Zylo is an audiophiles dream - it supports the HD FLAC audio format, a high-quality lossless audio codec. Unlike the MP3 and AAC audio codecs this one doesn't reduce the audio quality and delivers the best sonic experience with the proprietary Clear Audio technology.

The Sony Ericsson Zylo is a slider measuring 103 x 52 x 11.5 (16) mm and weighing 115 g. It is 3G enabled with dual-band HSPA but there's also quad-band GSM/GPRS/EDGE for world-wide connectivity. The Zylo's got a 2.6" TFT screen with QVGA resolution and scratch-resistant surface. 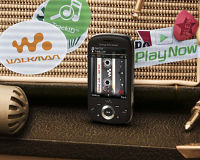 The Zylo packs a 3.2MP camera and of course the defining feature of the line - the well-known Walkman player with gesture controls (like Shake Control). There's a microSD card slot for cards up to 16GB for your music collection and the music player supports MP3, AAC and WMA as well as FLAC. The Sony Ericsson Zylo also offers social networking integration (Facebook, Twitter) and also Bluetooth and FM Radio.

The Sony Ericsson Spiro has a memory card slot for microSD cards up to 16GB and a 3.5mm audio jack. It supports the two most popular audio codecs - MP3 and AAC through the Walkman player of course.

what do you the sliding wire SE zylo is bad,it's mean this mobile is broken when we use the slidding for next month

my spiro is so good..but why I can't set the theme for this phone ??