While this is not the first time we've heard of this exotic fruit name bearing handset, we haven't had the pleasure of seeing it in a clear picture yet. Until today that is. Sony Ericsson ST25i "Kumquat" has emerged in a spy photo and it looks, well, quite familiar. 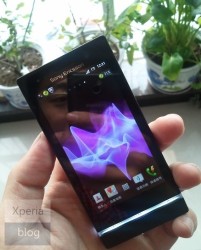 The upcoming smartphone looks a lot like the highly anticipated Sony Xperia S flagship, which got announced at CES this year. Its specs however, have been toned down a bit.

The device is rumored to feature a dual-core CPU, clocked at 1GHz and a 5MP snapper. The screen is reportedly in the 3.5" range, and has FWVGA resolution.

Expect to see the Sony Ericsson ST25i "Kumquat" get unveiled at MWC in Barcelona next month under a Sony name. As always, we will be covering it live, so expect the full scoop on the device as soon as we get it.

Unlike you, I really have an SE phone and I can say that the call quality is more than amazing. If you are really that stupid, Ericcson is the biggest telecommunication company in the world so I guess you are lying. I do encourage everyone else ...

Sony should stop referring to their products as phones or smart phones and just call them accessories. Sony phones are known to use outdated technology and they sell their products by making them aesthetically pleasing. Speaking from experience, the...