The Media Center is a winner

The Sony Ericsson W508 runs the flash-based Media Center. Its menu lists the Photo, Music, Video, Games, RSS feeds and Settings icons. As we've already said, there's an accelerometer on board so auto screen rotation can be activated if needed.

The Sony Ericsson W508 features the Walkman 3.0 player with all possible extras included, just like the W595 which we took a closer look at not long ago. The player supports a vast collection of file formats and has several equalizer presets (including the famous Mega Bass).

In addition, you also get Album art and the proprietary Sony Ericsson Shake control, which makes use of the phone's built-in accelerometer. The accelerometer is also put to use for automatic rotation of the display.

The animations on the home screen during playback depend on the currently selected Flash Lite theme.

The highly promoted Walkman Shake control feature works just fine. To make it work you'll need to know only one thing - the Walkman key located on the D-pad does not activate Shake Control - for that, you need to hold down the volume rocker on the side of the phone.

Another music-related Walkman goodie, SensMe, offers a different approach to populating a playlist. You can read more about the SensMe feature and the other details of the Walkman player in our Sony Ericsson W595 review.

The Photo gallery stores the shots you've taken along with the prebundled wallpapers. Luckily, auto rotation is available so you can still rotate images to landscape orientation not only manually but automatically as well.

Images are generally displayed as a 3 x 4 grid of thumbs. The shots in the dedicated Camera Album are sorted by the date they were taken on.

The Sony Ericsson W508 doesn't sport an inbuilt GPS receiver, but it can still geotag camera images using cell tower triangulation. If you pair it with an external Bluetooth GPS receiver, it will use it to properly geotag your camera images.

No matter whether you use Cell-ID or real GPS geotagging, you still get the View on map option in the image gallery. It allows you to check the place where the shot has been taken directly on the map using the preinstalled Google Maps application (data charges may apply).

The view on map feature that we love

The video player in the Media center supports fast-forwarding and rewinding, and the interface is simple and stylish. The video files are accessible via the file manager too. Display mode automatically switches when the phone is rotated.

The video section also houses the pre-installed YouTube client, which gives you full access to clips and uploading, bookmarked favorites and so on.

The integrated FM radio of the Sony Ericsson W508 has memory for 20 stations and supports RDS. It has a nice interface and makes great use of the TrackID music recognition service. The radio can be minimized in the background much like the music player, but offers none of the fancy fullscreen graphics.

The TrackID functionality is the same as on devices like the Sony Ericsson C903.

The audio quality of Sony Ericsson W508 bears the typical for the company mid-range handsets traits. It offers results identical to the Sony Ericsson T707, meaning excellent scores on most readings and a disastrous frequency response.

The frequency response deviates severely from the textbook rules. It has extremely boosted bass and treble and reduced mid frequency sounds. The graph looks as if an equalizer has been applied only that it wasn't. We can hardly imagine how far off the frequency response would be if you actually apply one.

On the positive side all of the other readings are pretty good with the distortion levels simply great. The stereo crosstalk, the noise level and the dynamic range are also nothing short of excellent. You can see for yourselves that save for the frequency response the Sony Ericsson T707 is quite a gifted musician. You can also notice its resemblance to some of the other Sony Ericsson handsets we have tested recently. 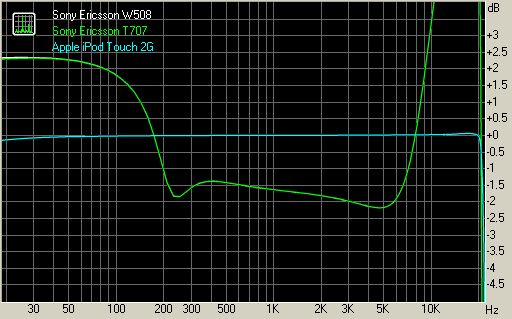