Music on the slide

The Sony Ericsson W595 features the Walkman 3.0 player with all possible extras included. Accessed from the very smart Media menu, the player supports a vast collection of file formats and has several equalizer presets.

In addition, you also get Album art and the proprietary Sony Ericsson Shake control, which makes use of the phone's built-in accelerometer. The accelerometer is also put to use for automatic rotation of the display.

The "Now playing" screen is simple but offers all the necessary controls and information. The D-pad offers playback control with their functions shown at the bottom of the screen. Above them is information on the current track such as album art, song duration, track name, performer and album.

Instead of album art, you can opt for visualizations but since they occupy the same small space as the album art, don't expect a great light show.

The animations on the home screen during playback make up for that though. They depend on the currently selected Flash Lite theme.

When you minimize the music player, the currently playing track, album and artist get displayed on the home screen with some nice graphics that perfectly blend with the screen if a Flash Lite theme is used.

The equalizer offers only 5 presets (including "Normal") but you can customize them. Luckily, the Mega Bass preset is also onboard.

Mega Bass is among the equalizer presets

Another highly promoted Walkman feature is Shake control. It allows you to change the currently running track and even shuffle your entire playlist with a simple flick of the hand.

All you need to do to use Shake control is press the Walkman key and shake the phone forward (for going one track forward) or backward (for going a track back). Both moves in quick succession does the shuffle trick.

You can also turn the volume up and down by gently tilting the handset while you hold the Walkman key pressed.

The other music-related Walkman goodie, SensMe, offers a different approach to populating a playlist. Instead of choosing genre or performer, you are presented with a coordinate system. The vertical axis is the tempo - fast to slow, and the horizontal axis is the mood - sad to happy. Songs are shown as dots placed accordingly and you use a circle to select the one fitting your mood best. You can of course modify the radius of the circle and repeat this several times for a single playlist.

As cool as that sounds it does have one inconvenience - the songs must be tagged by the Sony Ericsson Media Manager software. To do this you use the manager to transfer the songs with the SensMe analysis option enabled. Tagging songs by hand is not possible so you need to choose between analyzing the songs with the Media Manager, which takes a while, or do without SensMe until you have more time to transfer the songs properly.

The audio quality of Sony Ericsson W595 is a mixed bag. Much like with the W902 our hopes that the distinct music focus of the handset and Sony's great experience in the area will deliver great results weren't exactly justified.

The main issue is the frequency response of the Sony Ericsson W595 which deviates from the perfect severely. It has extremely boosted bass and treble and reduced mid frequency sounds. The graph looks as if an equalizer has been applied only that it wasn't. We can hardly imagine how far off the frequency response will be if you actually apply one.

On the positive side all of the other reading are pretty good with the distortion levels simply great. The stereo crosstalk is also one of the best we have come upon recently. You can see for yourselves from the following results that save for the frequency response the Sony Ericsson W595 is quite a gifted musician. 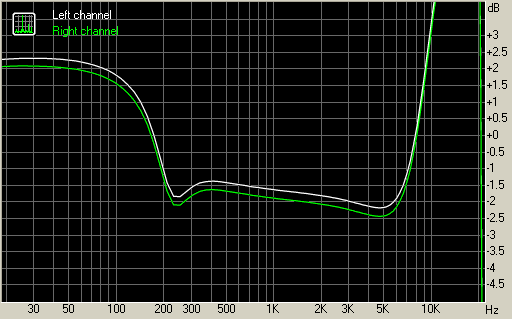