The Sony Ericsson W8 gallery automatically locates the images, no matter where they are stored. The vanilla Android gallery with the cool 3D effects isn't present however – you just get a plain grid with your images sorted by date.

Pinch-zooming isn’t available (in 2011!) but Sony Ericsson has come up with their own version of one-finger zoom that actually works great. You just hold your finger down and than sweep upwards for zooming in or downwards for zooming out. There’s also the double-tap zoom if that’s how you roll.

Sharing options include Email, Facebook, Gmail, MMS and Bluetooth and any other services that you might install through the Android Market, which supports gallery integration.

The other downside of the W8 gallery is that it doesn't display the full resolution photos, but downsized versions instead.

Video player is as basic as it gets

MP4 files are as good as it gets. The W8 cannot play DivX/XviD videos but you could look for a more versatile video player over at the Android Market.

Walkman music player not as good as we hoped

Despite the Walkman branding the W8 didn't get too many new features for its music player. It manages your audio files decently but there is very little extra functionality beyond that. Still it got a color facelift and now feels more Walkman and less Xperia.

There isn’t even search-as-you-type on the virtual QWERTY, so you will have to use the kinetic scrolling or opt for artist sorting. At least there are three smart playlists that automatically gather your Newly added, Most played and Never played tracks.

The audio quality is where the Walkman pedigree of the Sony Ericsson W8 really shows. The handset is loud without sacrificing almost any quality no matter if you use it with an active external amplifier or with a pair of headphones.

With no resistance applied to its line-out (i.e. when you use it with your home or car stereo) the W8 does great all over the field. The intermodulation distortion is the only thing that audiophiles might choose to frown at, but the rest of the scores are all excellent.

Performance is similar when headphones are connected - intermodulation distortion rises a bit higher, but the rest of the readings are more than the price tag could demand. We are especially impressed by the stereo-crosstalk reading, which is among the higher we have seen (with headphones plugged in, of course). 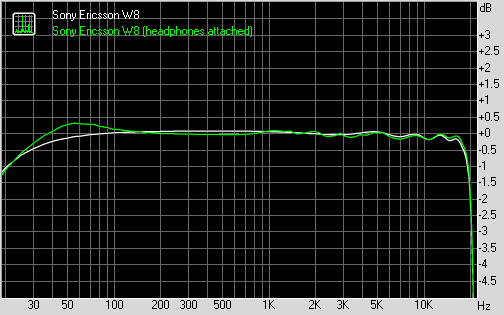 The Sony Ericsson W8 is also equipped with an FM radio, which has a really neat and simple interface. It automatically scans the area for the available stations and places “notches” on the frequency dial for easier scrolling to the next station. Or you can mark some of them as favorite for easier scrolling.