The XPERIA Arc uses the traditional droid Gallery, which hasn’t really seen much change in Gingerbread. It has good functionality, cool 3D looks and nice transition effects, but unfortunately only shows a downsized version of your images.

Thanks to the XPERIA Arc's multi-touch support pinch zooming is also available here but you can also double tap or use the +/- buttons.

There is no dedicated video player app on the XPERIA Arc as in most of the droids out there. Fair enough, maybe a fancy UI for picking a video is not that important, playing videos is what really counts. Well, that’s another disappointment – the video player supports only 3GP and MP4 videos.

To its credit, the XPERIA Arc did play a 720p MP4 video though. And the 4.2” FWVGA Reality screen is a pure joy to watch. If you re-encode your videos before hand, the XPERIA Arc can make a good video player.

Watching a video on the XPERIA Arc

The music player on the XPERIA Arc is quite similar to the music section of the axed Mediascape app. The interface is laid out in four tabs for the available sorting options: all artists, all tracks, playlists and albums.

The Now Playing screen offers nothing but the standard music controls, shortcuts to the library and the Infinite key, which allows you to quickly look up a song or album on YouTube.

The music fans will appreciate the equalizer: it’s a rich selection of presets.

The Sony Ericsson XPERIA Arc is also equipped with an FM radio, which has a really neat and simple interface. It automatically scans the area for the available stations and places “notches” on the frequency dial for easier scrolling to the next station. Or you can mark some of them as favorite for easier scrolling.

Update 04 April: It turns out that the default (normal) equalizer on the Arc actually boosts the bass and treble frequencies, instead of delivering a clean output. We retested the handset, using the flat equalizer and updated the text below to reflect our new findings.

We were pleased with the Sony Ericsson XPERIA Arc performance in our audio quality test. The frequency response of the smartphone is perfect with no headphones attached and still easily within the +-dB limit with headphones on.

The stereo crosstalk does get pretty mediocre when you plug in a pair of headphones, while the distortion levels increase too and we'd only describe them as average.

The rest of the readings are pretty great, though - the noise levels and dynamic range scores are among the best we have seen. With an active external amplifier you are also getting some pretty low distortions and stereo-crosstalk readings. Plus the XPERIA Arc is reasonably loud so it's all looking pretty good. 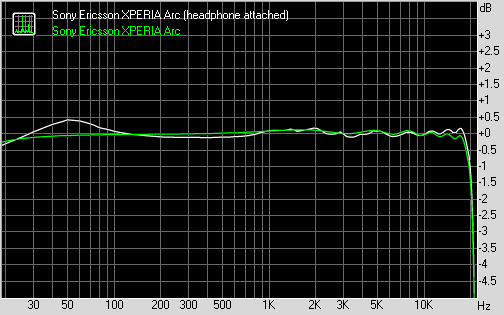