They did things to the Xperia arc. They took out its beating heart and carved a new phone out of it. But this isn't a scary story, it has a happy ending. It feels the Ray was always living inside the Xperia arc, waiting to be released. Like a seed that will grow a new plant.

That's how we imagine the Sony Ericsson Xperia ray was born. They cracked the rock open to get to the gem. 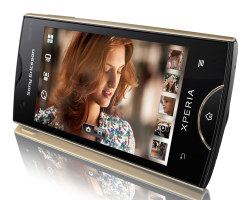 The Xperia ray had to shed off layers of armor but lost none of the courage. It's got all the exciting ingredients of the Xperia arc. The sharp BRAVIA engine display is there and so is the 8MP camera, complete with 720p video recording. And the ray is impressively thin too. It is one of the most compact members of the Xperia family, and one of the handsomest phones we've seen.

Sure, the arc is slimmer but it's a massive handset. The mini is tiny but too chubby at 16mm. If you want a really slim and compact droid, the Sony Ericsson Xperia ray is one of the few that fit the bill.

The screen takes much credit for the phone's good looks. The BRAVIA engine unit has the impressive pixel density of 300ppi. We had a close look at the advantages of the BRAVIA engine and the improvements are tangible.

The screen isn't the only thing to borrow from the wealth of Sony experience. The 8MP camera packs an Exmor R sensor, which boasts improved low-light performance. It also captures 720p video with continuous autofocus - on paper, you get the same camera as in the Xperia arc.

Before we go on with the Sony Ericsson Xperia ray's story, you should get to know the protagonist better. Here's the list of all the virtues and the vices as we saw them:

The ray is powered by the 1GHz processor with 512MB RAM and Adreno 205 graphics, courtesy of the Qualcomm MSM8255 chipset that is prevalent in the Xperia line. It's no match for dual-core, but if it's good enough for the gaming-centered Xperia Play, the ray shouldn’t have any issues with speed.

So, the hardware on the inside is pretty familiar and so is the software. But the slender, eye-catching body is the big deal so we'll focus on that first. We'll also rummage through the retail box, so follow us on the next page.

My first Android phone. I bought in 2012. Still working. This is the classiest phone i ever had.

Sony xperia ray is available or no ?