The chipset will be paired with a hearty 4GB of RAM and 64GB storage and will run Android 7.0 Nougat at launch. The Sony G3221 also sports a 23MP main camera and a 16MP selfie cam, plus a 1080p screen. 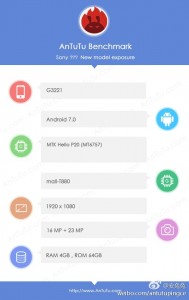 The Xperia M5, which launched in mid-2015 had similar specs (except it was powered by a Helio X10), perhaps we’re looking at a successor.

They do make the best sensors you'll get no argument from me there although you wouldn't know it's the best judging by their own results.

Yes ...but the other companies dont get the best semsor that sony has produces the best camera sensor like in xperia xz ...xperia xz camera sensor is the best in the world even their camera not so good but that sensor are best...sony produce the best...