Sony is working on a low-end 6.1-inch smartphone

For the past couple of years in the mobile world we've pretty much gotten used to the general rule that high-end smartphones are bigger than lower-end ones. Sony looks set to change that perception, however.

The company is working on a device bearing the model number D2203, and this is a huge phablet - and yet comes with very low-end specs. 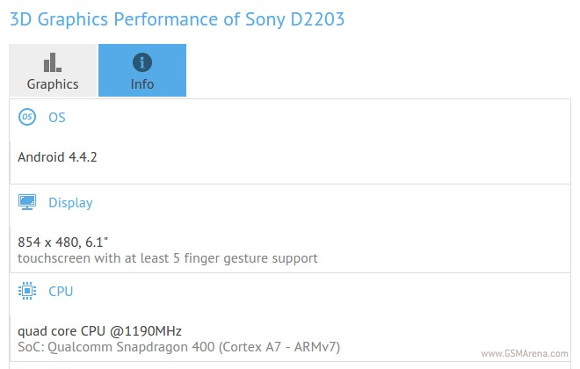 Someone put the Sony D2203 through the paces of GFXBench, and because of this we now have a full spec list for this handset.

It will have a 6.1-inch touchscreen with the appalling 480x854 resolution (making for a pixel density of just 160 ppi), a 5 MP rear camera, and a VGA front-facing snapper.

The device will be powered by a Qualcomm Snapdragon 400 chipset with a 1.2 GHz quad-core Cortex-A7 CPU and 1GB of RAM. Built-in storage should be 4GB, though hopefully expandable via microSD cards.

The Sony D2203 will also have Bluetooth, GPS, NFC, and Wi-Fi of course. The prototype that was benchmarked was running Android 4.4.2 KitKat.

With such lowly specs it's not immediately apparent who this handset is intended for, but perhaps a small price shall make up for its shortcomings.

Maybe they should put BW screen to make it retro kind..LoL Obvious this cheap shit is intended to be shiped in China or Belgravistan. SAD Sony !

if only it comes with 4.7" screen and decent price(which is rather impossible), then I will consider buying it.

This is a complete mismatch, i mean between the screen and the internals. The only reason why i'd consider buying this is the phone functionality it'll have because imo, it is better than a 7" tablet without sim support.