Sony Corporation released its financial results for the latest fiscal quarter between April and June, which is marked as Q1 2019 in the internal documents but is effectively the second quarter of the calendar year. While income rose 18% on a yearly basis, the Electronic Products & Solutions division reported a decrease both in sales and in operating income. 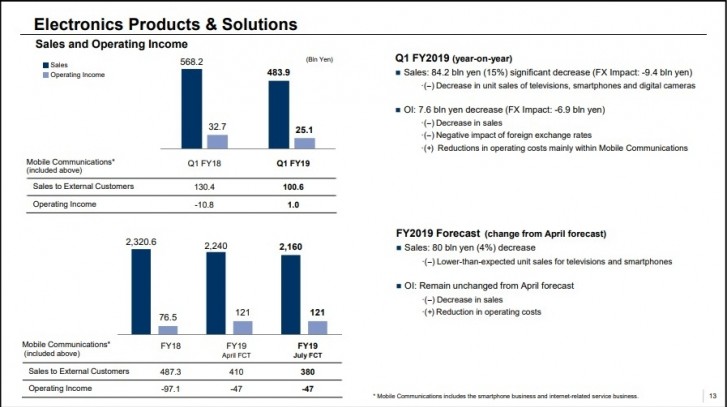 While the whole EP&S department is going down quarter over quarter, the Mobile Communications segment brought JPY1 billion in income, instead of shedding JPY10 billion from the total budget. This is the outcome of several reductions in operating costs, somehow negating the poor sales and negative impact of the foreign exchange rate.

The forecast for the fiscal year, ending on March 2020, is that sales will be 4% down in the whole department, with mobile devices expected to bring just JPY380 billion, instead of the JPY410 billion predicted three months ago. Operating income is also in the red, painting a bland picture for the future of Sony smartphones.

Thanks for the tip, jmposvip!

I think you don't even watch the link I post here, the Xperia 1 has better HDR than before on automode and the manual HDR even surpass iphone. Xperia 1 also retain more natural but not oversaturated color, other than this it also have more texture a...

Then i'm wasting my time explaining it to you. You know nothing about photography. Overblown highlights & overexposed background is not natural. They need to fix those two. U just keep your Z2 please, because even you spend money on new phon...

Once again you excuses for Huawei, Master AI camera isn't as good on ads. About HDR it isn't everything and isn't a standard, but Xperia HDR camera isn't bad either, it's automode looks capture more natural and when manual mode the HDR camera even ...