Mobile World Congress is well under way and we stopped by Sony's stand to play around with whatever the Japanese company had prepared for us. We weren't disappointed, even though the tech giant had decided to postpone the launch of the Xperia Z4 high-end smartphone. 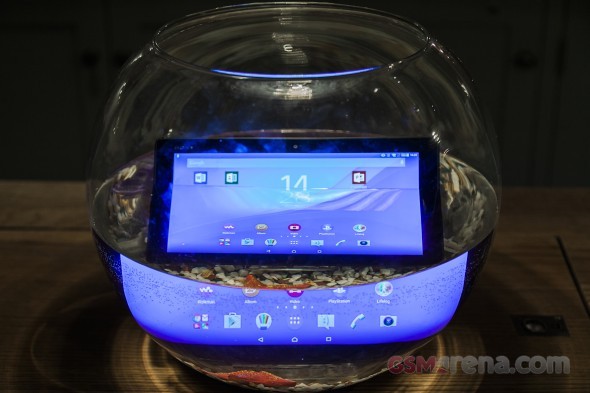 Sony instead pulled the wraps off its new generation full-scale slate, the 10.1-inch Xperia Z4 Tablet. It is stunningly thin and light, features a sharp Retina-grade IPS panel, and retains the isolation from the elements, which has become synonymous with the Sony lineup. The tablet is also equipped to be a strong performer and packs innards, worthy of its flagship designation.

The Xperia M2 Aqua introduced IP68 certification to the budget-conscious crowd only a few months ago. The Xperia M4 Aqua, which Sony just unveiled, comes with markedly better hardware, including an HD display, 64-bit Snapdragon chipset and twice as much RAM.

Sony brought a bunch of accessories as well, most notably a Bluetooth keyboard dock for the Xperia Z4 Tablet, which turns it into an Android ultrabook. A quirky wireless speaker was revealed too alongside a new wireless headset. Fans of wearables weren't left out either, and two more strap options for the SmartWatch 3 were released.

Join us on the following pages where we share our first impressions with all of the above.

If Sony can improve on the mediocre battery life offered by the other flagships as well as decent specs and sdcard support they can have my money :D