We haven't seen any gold phones in a while, but we didn’t expect Sony to be the one to fill that void. Sony ran a contest on its Facebook page over the weekend with the prize being a 24 karat gold-pated Sony Xperia P.

The contest is for Nordic countries only and will be over in a couple of hours. If you want to participate, you have to send an email to fans.se@sonymobile.com answering the question "What is a gold Friday for you?" (this is an automatic translating so it may not be 100% accurate, but we're sure people in Nordic countries don't need Google Translate). 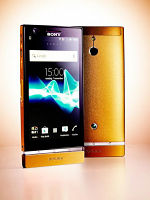 The Xperia P launched early this year and one of its major attractions was the aluminum unibody. The Limited 24K Gold Edition will go to a lucky winner today and they might be the only ones to have it.

Sony's Facebook page makes no mention of this limited edition going on sale. And even if it did, did anyone buy those gold-plated Nokias? Sure, this has the advantage of running Android rather than Symbian - or worse still - S40, which puts it head to head with the Lamborghini TL700 and the Mobiado Grand Touch.

Anyway, the winner of the Sony Xperia P Limited 24K Gold Edition (who is yet to be announced) has our congratulations.

guys, bring your xperia fones to me n il make it gold plated for yu, but dnt frgt to pay :PPPP