After a brief hiccup, the Android 7.0 update for the Xperia Z5, Xperia Z3+ and Xperia Z4 Tablet rolled out in February this year. Now comes the sequel – 7.1.1 is being received by these same devices as we speak. 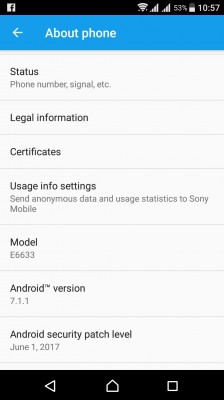 Xperia Z5 Dual's About screen after the update

Among the new features is Xperia Assist (an introduction and some tips for your phone, plus Stamina mode control). Image processing has reportedly been improved, but the laggy call log has not.

I have only one issue with my Sony Xperia Z5, but not sure if its only my particular phone or its on all of them. Basically when I am watching a movie or doing something e.g. snapchat, when the phone get warm screen becomes darker even if I put the h...

Installed the 7.1.1. update to Z5. After intsalling I didn't get any mobile signal. I decided to restart the phone. I shut it down normally but when I tried to put phone back on again it didn't do a thing. When it's connected to a charger it jus...