Sony unveiled "the slimmest 5.3-inch phone," the Xperia T3. It measures 7mm thick, not the thinnest ever but still impressive for a mid-ranger of this class. It shares a lot of similarities with the Xperia T2 Ultra, but is more compact.

The Sony Xperia T3 has a Triluminos IPS display with 720p resolution. The screen has an average 277ppi pixel density and Bravia Engine 2.

The frame is built following the traditional OmniBalance design with a metal frame that's exposed on the sides. The back is a matte plastic in one of three colors: white, black or purple. 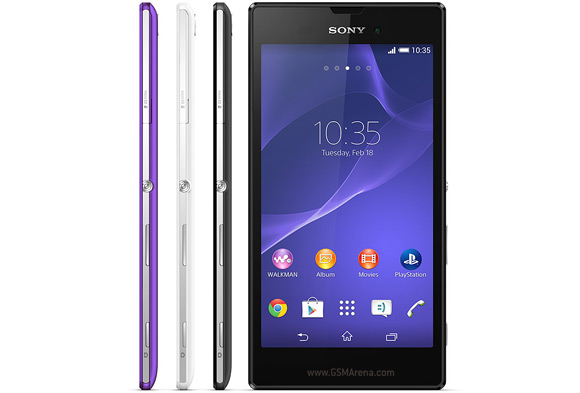 The new 5.3" smartphone runs Android 4.4 KitKat on a Snapdragon chipset with a quad-core Cortex-A7 CPU, 1GB of RAM and Adreno 305 graphics. It has 8GB of built-in memory (5GB user available), which is expandable by microSD cards of up to 32GB.

The Sony Xperia T3 has rich connectivity for a mid-range device, starting with the usual 2G/3G, LTE Cat. 4 for up to 150Mbps download speeds, Wi-Fi with Miracast and DLNA, Bluetooth 4.0, NFC and A-GPS.

The relatively small 2,500mAh battery promises up to almost 13 hours of talking, plus there's Stamina mode to reduce power usage when you need more out of the battery.

the camera cannot even capture which is already in the preview. what is wrong with the developers. It must be simple fix. The capture is too late. Screen shots of the preview is far better quality than the captured picture in case of brightness an...