21:9 aspect in a compact phone

The Xperia 10, along with its Plus stablemate, has a 21:9 aspect display. The vanilla 10 is a lot more pocketable though, thanks to its 6.0-inch diagonal. It may be smaller, but the resolution is still 1080x2520px, making for a higher 457ppi density compared to the 10 Plus's 422ppi. Again, there are no cutouts in the display (yay!), just the ever so slightly rounded corners. 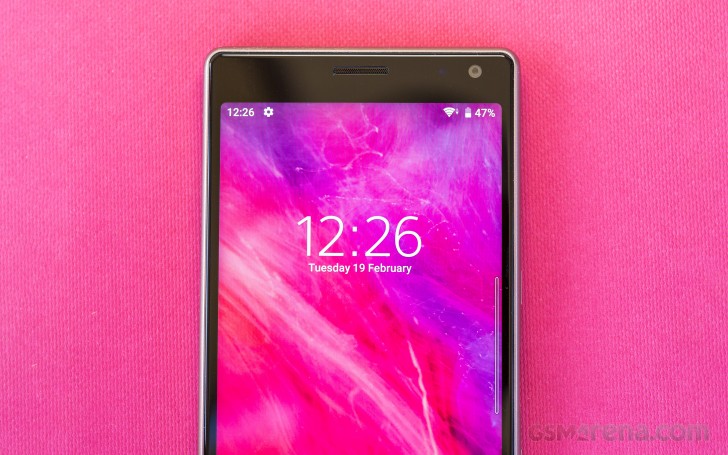 We measured a maximum brightness of 549nits - a little short of the 10 Plus's 583nits, but still above average for the class. There's no boost when the Adaptive brightness toggle is turned on. Thanks to reasonably little illumination when displaying black, the Xperia achieves a pretty good contrast around 1500:1.

On the far left end of the slider we measured 5.5nits, which is acceptable for reading in very dark environments without straining your eyes.

We didn't experience much trouble using the phone outdoors and it remained legible in all but direct sunlight, though you'll want to wipe the smudges off the glass for a better experience.

As we encountered on the 10 Plus, there are two tiers of color settings on the Xperia 10 - 'Color gamut and contrast' and 'White balance'. The first one lets you choose between Standard and Super-vivid modes of color enhancement as well as letting you keep the enhancements off. 'White balance' then lets you choose between Warm, Standard, and Cool color temperatures or you can dial in your own RGB values with the sliders.

None of the modes makes any claims for accuracy, and after our experience with the 10 Plus, we didn't expect much in this area. In the Off mode, we measured an average DeltaE of 5.0 and a maximum of 9.3 when aiming for sRGB reproduction, with whites heavily shifted towards blue. While not particularly accurate, it's still better than what the out-of-the-box Standard setting gave us - average DeltaE of 6.1 and a maximum of 13.6, while in Super-vivid those values were 6.9 and 14.1. We tried the image enhancement modes against AdobeRGB and DCI-P3 targets but there was no match. Setting the White balance to 'Warm' didn't dramatically improve things, while 'Cool', predictably, was very blue.

We were able to achieve a much more faithful representation of the sRGB color space with the 'Color gamut and contrast' set to Off, and the RGB sliders at R255, G138, B0 - with those settings we measured an average DeltaE of 2.3, with the whites much closer to the target and noticeably less blue.

The Xperia 10 is equipped with a 2,870mAh battery, a slightly smaller capacity than the 10 Plus's 3,000mAh power pack. Most competitors have bigger batteries, though in all fairness the Xperia's screen is one of the smallest around - by area, which is what counts. The Galaxy A7 (2018), Xiaomi Mi 8 Lite and Huawei P smart 2019 are in the 3,300-3,400 ballpark, while the Moto G7 is closest to the Xperia with its 3,000mAh battery.

The Xperia posted unimpressive endurance results in our testing, some of the lowest in its class. We clocked 8 hours of looping videos in airplane mode and 8:42h in our Wi-Fi web browsing test, with most phones mentioned above exceeding 10 hours in either test, the Galaxy in particular by a lot. Only the Moto G7 couldn't make it to 10 hours in video, but its 9:05h score is still better than the Xperia's. The 18 hours of 3G voice calling that the Xperia 10 is capable of are similarly below average, though not as important in our book.

The overall Endurance rating then works out to 65 hours. Our battery tests were automated thanks to SmartViser, using its viSer App. The endurance rating above denotes how long a single battery charge will last you if you use the Sony Xperia 10 for an hour each of telephony, web browsing, and video playback daily. We've established this usage pattern so that our battery results are comparable across devices in the most common day-to-day tasks. The battery testing procedure is described in detail in case you're interested in the nitty-gritty. You can check out our complete battery test table, where you can see how all of the smartphones we've tested will compare under your own typical use.

We weren't super excited about the bundled 5V/1.5A charger, but it still does a better-than expected 0-to-100 time of 2:11h with 30% showing on the battery indicator at the 30-minute mark. An 18W power delivery adapter is able to get you to a much better 50% in half an hour, with a full charge taking 1:53h. We measured this with a Pixel charger, but you can expect similar results if using Sony's own 18W PD unit - whether you get lucky and have it bundled, or buy it separately.

Much like its bigger Plus brother, the Xperia 10 has a single, bottom-ported loudspeaker - it's the grille to the right of the USB-C port while the left one is just a mic. 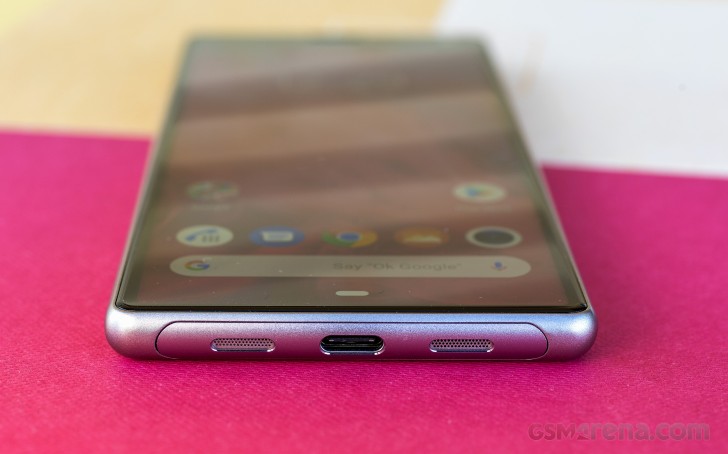 Single as it may be, it's plenty loud and made it into the Excellent bracket in our three-pronged test. We measured a slightly lower output in one of the tracks, when comparing to the 10 Plus, but even so it was of the higher readings in that particular test, so no worries. For all its loudness, the Xperia's speaker is pretty lacking in the lower frequencies - don't expect much bass from it.

The Sony Xperia 10 gets excellent marks for clarity in the active external amplifier part of the audio quality test. It did very well with headphones too - with the moderate spike in stereo crosstalk all the degradation you get.

Yet, much like its Plus sibling, the Xperia 10 came short of the competition when it comes to loudness. The smaller of the two Sony midrangers has a slightly higher volume than the bigger one, but not enough to lift it above the below average bracket.