The Xperia 5 has a 6.1-inch display. The diagonal sounds huge next to the latest true Compact, the XZ2 Compact's 5 inches, but such are the times. On the one hand, the 21:9 aspect does make for a narrower handset, and on the other, people's perceptions of a pocketable phone have evolved. 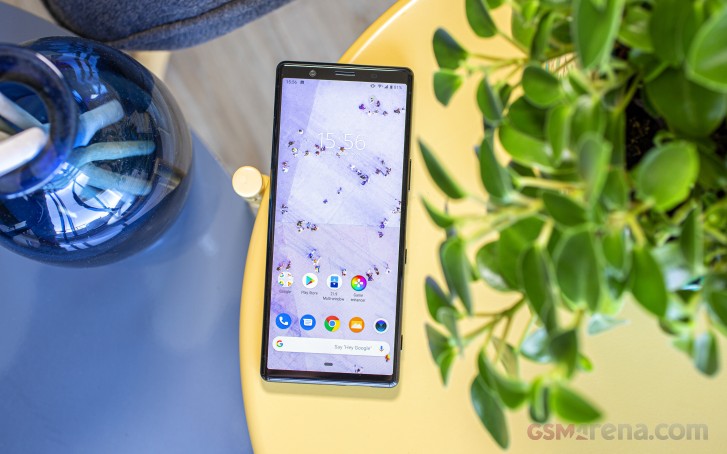 In the default Standard/Cool color mode we measured a maximum brightness of 353nits - slightly lower than average for a modern OLED display. This goes all the way up to 574nits in Adaptive brightness under direct light - much better, though still not among the leaders in the pack.

In Creator mode (which sets the color balance to Medium) we got higher readings both manually adjusting the slider (386nits) and in Adaptive mode (631 nits).

We measured a minimum brightness of 2.2nits - perfectly adequate, too.

Speaking of those display modes. You have settings for "Image quality" where you can pick between Standard and Creator modes, and then there's the 'White balance" setting where you can choose between Warm/Medium/Cool, or adjust to your liking with RGB sliders. 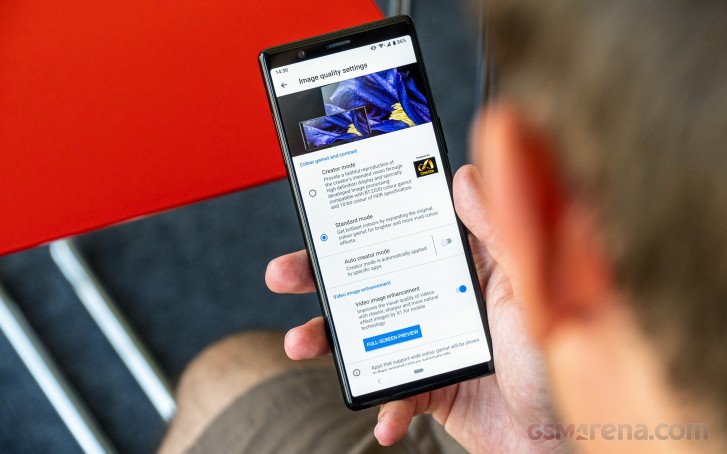 In this Creator mode, the Xperia 5 should display as accurate colors as possible with any HDR video (it's the ITU-R BT.2020 color space in particular). It will also upconvert any SDR stream to HDR all while making sure the stream's color gamut is converted too. Of course, your best bet for making the most of the feature is watching appropriate HDR video content. You can either switch the Creator mode permanently on or have it activate automatically when you are playing back the right content.

We found the display to be very accurate in displaying our sRGB test swatches in Creator mode with Warm white balance (average deltaE of 1.9, 4.2 maximum), though the grayscale was off the most (dE around 4) and having a bluish tint. The shift to blue is noticeable in most display modes.

We're guessing our iProfiler/Calman/MobileForge testing setup can't trigger the right Creator enhancements because we didn't get very accurate readings when targeting other color spaces, and Standard mode was generally off the mark too.

All these numbers don't necessarily tell the whole story as we've come to find out in the past, and this is yet another such instance. The Xperia 5 posted excellent numbers in all disciplines comfortably outlasting the X1 in the screen on tests. In our testing, the Xperia 5 was good for 11:40h of Wi-Fi web browsing and 16:28h of looping videos - compare that to the Xperia 1's 8:57h and 11:10h results. The little Sony also beats the little Samsungs in both these tests, by a particularly wide margin when comparing against the S10 (10:10h and 12:56h results).

In the end, the Xperia 5 scored an Endurance rating of 96h with particularly good performance in the screen on tests. 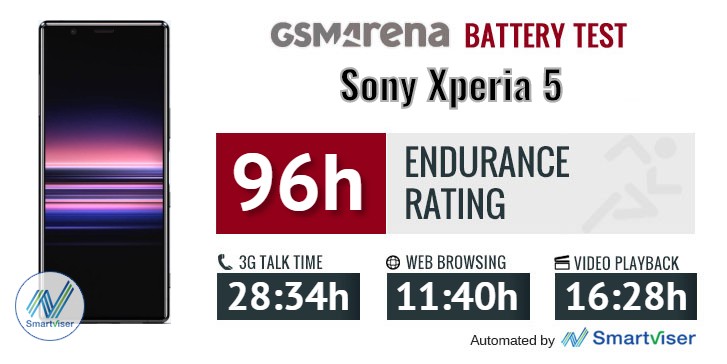 Our battery tests were automated thanks to SmartViser, using its viSer App. The endurance rating above denotes how long a single battery charge will last you if you use the Sony Xperia 5 for an hour each of telephony, web browsing, and video playback daily. We've established this usage pattern so that our battery results are comparable across devices in the most common day-to-day tasks. The battery testing procedure is described in detail in case you're interested in the nitty-gritty. You can check out our complete battery test table, where you can see how all of the smartphones we've tested will compare under your own typical use.

The bundled adapter gets the Xperia 5 from zero to full in 1:50h which isn't super fast. The charging rate tapers off severely towards the end, however, and an hour-long charging session will take you to 80+ percent, with 53% showing in the battery indicator 30 minutes into it.

The Xperia 5 has a similar stereo speaker system to the one on the Xperia 1. A primary driver ported on the bottom of the phone handles the right channel's mids and highs as well as most of the lows for moth channels, while the earpiece doubles as a left channel. There's no switching of channels if you rotate the handset the wrong side up, so be sure to have the buttons facing up if the correct channel orientation is important to you.

That aside, the Xperia 5 sounds a lot like its big brother and posted very similar results in our three pronged test, earning a 'Very Good' mark. The small Samsungs are a little louder, and do deliver slightly more kick in the lows, but the Xperia is more than adequate.

For more perceived bass, Sony has the Dynamic vibration system which is meant to engage the vibration motor in tune with the sound. In practice, we didn't particularly enjoy it - we found it to often follow the sound as opposed to work with it, and the motor itself doesn't have the nice satisfying feel of the units you'd find on a Pixel or an iPhone.

The good news is the Sony Xperia 5 matched the solid output of the Xperia 1 with an active external amplifier - it delivered audio of perfect clarity and above average loudness.

The not so great bit is that the 5 didn't manage to build on the 1's decent but uninspiring performance with headphones. Some intermodulation distortion crept in, the stereo crosstalk rose more than average and the volume went down to below average too. Good enough for most people overall, but not great for a flagship.