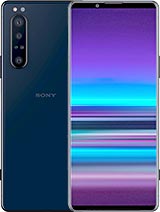 A flaghship series and not have a wireless charging? very nice sony. even the fast charging only had capacity 18W, 2020 18W?c'mon sony the other brand offer more and more build quality than yours. You must considered what market needs don't just keep your own pride

Victor, 08 Jan 2020I've come to conclude that Sony's greatest enemy is Sony itself: 1. Pricing their phones too h... moreThat's just Japanese product in general. They're extremely stubborn, xenophobic and ignorant.
If they don't take a look around themselves and adapt then they'll be out-competed by China and have a huge recession by next decade.

BeeAnt, 09 Jan 2020At a glance, this thing is very promising. But the lack of Super SlowMo turns me off, consider... moreSony practically invented the sensors capable super slow mo, though they never called it such a stupid name.
This phone will most likely use their sensors which are capable of 960 FPS as seen on all of the last 4 years of Sony flagships.
However, record duration will be limited for a few seconds unless this phone actually uses a snapdragon 865.

Anonymous, 09 Jan 2020do you have one of the latest routers with wifi6? you don't? then stop complaining, this w... moreMy busy workplace does. Sometimes I have to make video calls in busy places.

Most of the comments must be paid negative reviews or some people who want to feel important.

why are people complaining about it being too tall, most phones its size are around 162 with notches. xperia phones are about 5mm (0.5cm) so you get to use more screen with about 5mm of top bezel.

I have handled xperia 1, 5, and 10 plus. all of which handled beautifully especially the 5 it feels like a compact but without the compact size.

around 8mm thickness is on bar with most phones on the market.

I would say their camera software is the weakest link, I never cared for cameras on phones and i would never really care. Sony images always come out with true colors and less artificial feel to it.

I get it, most people invest in the phone and it is all they have as far as electronics (new kids at work do't know how to use Microsoft suit ). They can't afford owning multiple platforms; however, a phones are crazy practical now days, and 21:9 is perfect for my use case. I can stack 2 apps and have space for my keyboard to popup.

then stop complaining, this won't affect you much.

Anonymous, 08 Jan 2020Those small phones always had battery issues or had to be thick, in a way being taller and not... moreyeah. xperia 5 has a smaller battery capacity, but it also has a smaller screen which consumes less juice than bigger ones. If you have read/watched some reviews, they're saying that xperia 5 lasts longer than most of the competitors.

At a glance, this thing is very promising. But the lack of Super SlowMo turns me off, considering the price and flagship class.

Its a fair price for these phones I guess. Yes photos are a bit better ob other brands auto mode but once you know how to take a picture you can make awesome shots with really any "not too bad" smartphone.

I really like the 21:9 form factor because I want a big screen but I also hate that they are too large. With these we can get best of both world.

Xperia 5 battery is also great, at 3100mah it even beats MiNote10pro who has like 5200 I think. Great performance and optimization from sony.

Check the tests Xperia 5 takes good shots in low light. Better than any other phone without auto mode. They'll surely improve it again in next phone. I don't really see what more we could need. Face recognition is gimmick to me, fingerprint scanner on the side is the perfect place, I hope there'll be a 6.1 like the actual Xperia 5 because Yea 168mm is a bit too tall for me but in width, around 70mm is the max that I want.

No one can like Sony but love sony but I can't buy my loving smartphone because pricing very high.
No problem insha Allah one day I will buy my love..

I've come to conclude that Sony's greatest enemy is Sony itself: 1. Pricing their phones too high 2. Selective marketing only in certain markets. Otherwise tie phones are great. I'm in Africa and it's becoming increasingly clear that Sony does not consider its phones as made for Africa. So iPhones, galaxies and mates rule the prime segment that runs into tens of millions of devices. Transsion holdings is happy to secretly dominate the African mid-range market that's much much bigger.

Finally sony puts out a decent device, hopefully it comes with a decent price. Sony if you come out wanting more than $700 it will likely stay in the shelves. It's a crowded market.

iwil, 08 Jan 2020if it were 5 inch and 16:9 or 18:9 I would buy it no matter how much it costThose small phones always had battery issues or had to be thick, in a way being taller and not wider or thicker is the best solution. Also you don't get a notch but thin top and bottom bezels which look way better.

There's a non plus version of this phone, it's only 6.1" same processor but the battery capacity pays for the smaller size.

wow, 07 Jan 2020There is still people buying sony phones?Apparently there was only 600k Sony devices sold in 2019. So, thats the answer to your question. Even that number is shrinking year after year there are still some people who love Sony mobile phones. Every brand has their loyal fans, because every brand has something unique and people used to use those features. For example; There are some people who don't want to have same car, same snickers or same cell phone as half of their neighborhood. That's why is great we have so many choices. Sony is not a typical cell phone brand. That's the reason why I like them. I don't want to be an average Joe. There is nothing wrong with being average Joe and choosing your best for buck product, for example Realme or Xiaomi, but that's not me. Call me special or stupid if you want, but I refuse to be like everyone else, it is because I choose to. Meaning you don't have to.
Everybody has their own opinions and choices in everything. There goes my 2 cents. I know this comment will be gone and forgotten like... Tears in the rain...

Total of 148 user reviews and opinions for Sony Xperia 5 Plus.
ADVERTISEMENTS