The Sony Xperia C comes with the custom Sony gallery, called Album. Images are organized into groups of thumbnails and sorted by date.

There is a second tab here, My Albums, which includes online albums (Facebook, Picasa) along with albums stored on devices in the local network. Also here are some special albums - Maps and Globe, which use the geo-tagging info to display photos where they were taken, and faces, which groups photos by the faces of the people in them.

You also get the latest version of Google's default Photos app (the default gallery app in Android 4.4 KitKat). Upon opening the app you'll see two tabs - Camera and Highlights.

Once you open a single photo you'll get three shortcuts below the image - Edit, Share and Delete. That's it. The Editor allows you to crop, rotate or add filters to your photo.

The Photos app has a few hidden goodies that we almost missed. There is a hidden navigation menu pane that is revealed with a swipe from the edge of the screen anywhere in the gallery. You can easily switch Google+ accounts from there, go to Albums, Videos, Photos you are tagged in, all Google+ photos or even the deleted photos.

The video player is dubbed Movies and it too has a great custom UI. It's connected to Gracenote, which helps you find additional information about the movies and TVs you have on the phone. It will even download posters for them and for movies, it will download metadata like genre, synopsis, director and cast.

Unfortunately there is no AC3 audio codec support, which turns out to be one of the most used codec lately. That's easily fixable though with a quick stop over at the Google Play Store where you can get a hold of a third-party video player with an enhanced codec support

Watching a video on the Xperia C

While that's certainly an option, you lose the Gracenote features - the Movies app always plays videos (or tries to, anyway) with its own player rather than what you've set as system default.

The updated Walkman music player, which is present on all 2013-Xperia smartphones is also on board. It offers the same cool interface as before, but this time it has more options for sound enhancement.

The RGB notification light below the screen will change to match the album art of the currently playing song (you can disable this if you don't like it).

The Sony Xperia C also features an FM Radio aboard complete with RDS support. The app features multiple visualizations and integrates with TrackID to recognize the currently playing song. You can even directly send an "I'm listening to..." post to Facebook.

Audio output is decent but quiet

The Sony Xperia C did fairly well in the first part of our audio output quality test. When plugged into an active external amplifier the smartphone posted very good to excellent scores all over, even though it didn't break any records. Volume levels were low, though, which was somewhat disappointing.

When you plug in a pair of headphones, the Xperia C lets a rather hard to detect amount of distortion creep, while its stereo crosstalk worsens but still remains decent. The rest of the readings remain very good, but the volume levels drop even more in this case. 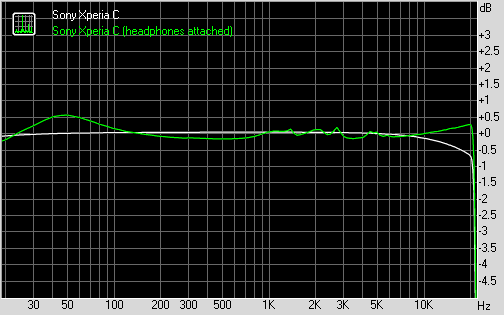