The Sony Xperia E1 comes with the custom Sony gallery, called Album. Images are organized into groups of thumbnails and sorted by date.

Video player has good UI, codec support could have been better

The Xperia E1 didn't experience any difficulties playing 720p and 1080p videos. It loaded them pretty swtiftly and that's no surprise considering the hardware that's under the hood. MP4, DivX, X264 and MOV files played without a glitch, too.

However, Sony still refuses to pre-install codec support for AVI, MKV and XviD formats. The Movies player didn't play them at all, and neither did it open AC3-enabled DivX. That's easily fixable though with a quick stop over at the Google Play Store where you can get a hold of a third-party video player with an enhanced codec support

Watching a video on the Xperia E1

While that's certainly an option, you lose the Gracenote features - the Movies app always plays videos (or tries to, anyway) with its own player rather than what you've set as system default. We tried BS Player and it worked well with the aforementioned video formats.

The updated Walkman music player, which is present on all 2014-Xperia smartphones is also on board. It offers the same cool interface as before, but this time it has more options for sound enhancement.

FM radio with some neat tricks

The Sony Xperia E1 also features an FM Radio aboard complete with RDS support. The app features multiple visualizations and integrates with TrackID to recognize the currently playing song. You can even directly send an "I'm listening to..." post to Facebook.

Sony has updated the FM Radio app and as a results it's now more stable than it was on some recent mid-range Xperia smartphones.

The Sony Xperia E1 did decently in our audio quality test, without breaking any records. It produced very good scores when plugged into an active external amplifier and only let its stereo quality slide when we plugged in a pair of headphones.

The frequency response was spot-on for most of the range, the signal-to-noise ratio and dynamic range were great too and there was no detectable distortion. The volume levels were rather low, though. 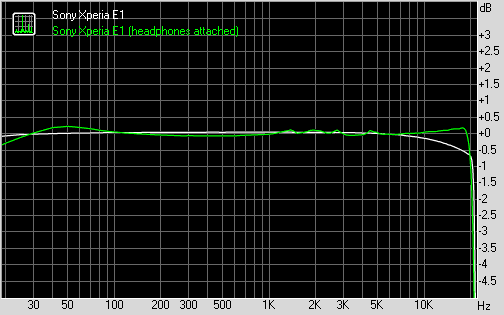