Sony's affordable E-series has definitely come a long way and with its current fourth generation. The company is really going to great lengths to deliver abundant functionality and usability at a modest price tag.

Recently, we took a look at the Sony Xperia E4 and found it falling short of its predecessor in most respects. Still, for what it's worth, Sony has done admirably, considering the price range, but perhaps, they could have done just a little bit better. And before you say we have no right to demand more from a €130 smartphone, let us introduce you to its sibling - the Xperia E4g.

At first glance, both devices look almost identical, but the Xperia E4g really seems to be Sony's more-successful second attempt at improving the Xperia E3. 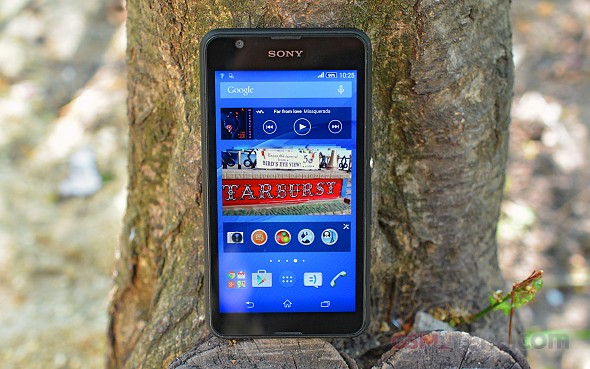 With the Xperia E4g Sony has managed to retain the tantalizing price tag and through some creative adjustment in the specs sheet, they ended up with a phone which, unlike its sibling, doesn't have to skip on some of the nicer features of its predecessor, the E3. In other words, the Xperia E4g is in a way the true successor of the E3.

It all comes down to choice when keeping costs low is a primary objective and the E4g has definitely opted to do things a little differently. Instead of bumping the display size to 5.0-inches, this device has opted to go for a smaller 4.7-inch one and this is pretty much the only aspect the Xperia E4g falls short of the E4, at least on paper.

The panel has retained the same 540 x 960 pixels resolution and the reduced screen size leads to a higher ppi of 234. The phone is also a tad smaller, measuring 133 x 71 x 10.8 mm and weighing in at a good 10 grams less for a total of 135g. Exterior changes go even further, but more on that in a little bit.

Underneath the hood, there has been a definite power-boost compared to the vanilla E4. The Mediatek MT6582 SoC in the Xperia E4 has been swapped out for a MediaTek MT6732 chip. This one has a much faster Mali-T760MP2 GPU.

The rest of the specs are pretty much unchanged, but, then again, so is the price tag. The camera setup is nothing special with 5MP stills and 1080p video on the main unit, but the 2MP/720p selfie cam is a welcome improvement over the VGA front-facer of the Xperia E3. There's a microSD card slot too, of course. RAM is once again set at 1GB.

But the Xperia E4g has yet another treat in store. Like its name suggests, it offers LTE connectivity, just like the E3 did, so Sony definitely saw the error of its ways after the original Xperia E4 skipped on the ever-so-important connectivity option. The new chipset also come with GLONASS support, another clear improvement over the E4.

The Xperia E4g will be available globally, perhaps its single-SIM and dual-SIM versions targeting different markets.

Design-wise, the phone bears a lot of signature Sony elements and is kind of bulky. It does, however offer noticeable better materials than the Xperia E4, mainly in the back plate, which has a rubberized soft finish, a lot nicer than the plain plastic used on the E4g.

Follow us to the next page for the unboxing.

Now after 4years battery is down how to get bettery

Why is the battery not lasting