You should have noticed the two switches at the top by now. The first opens a different gallery section that stores your 3D panorama sshots, while the second opens the Sweep Multi Angle sshots section.

To view the 3D panoramas in 3D, you need to connect your phone to a compatible 3DTV. Multi Angle sshots are harder to view outside the device as you need something with an accelerometer and the proper app - you best bet is another Xperia.

The BRAVIA engine enhances contrast and colors by sharpening the image and reducing noise. These steps would normally lead to artefacts, but you'll have to look from really up close to notice. You can switch BRAVIA off, but we recommend keeping it on - it really improves the image quality.

There is no dedicated video player app on the Xperia ion as in most of the droids out there. DivX, XviD and MKV videos are supported but the Xperia ion has a rather selective filtering and not all videos got through.

The Xperia ion managed to play every MP4 file we threw at it, even the 1080p videos. Most of the high-res DivX/XviD/MKV files did run too. Unfortunately, the Xperia ion has rather patchy audio codec support, most notably AC-3 is not on the list. So, some videos played without audio and some with unsupported bitrate didn't pass at all.

There is no subtitle support and there is no way you can see video information (file name, codec, size, etc.).

Watching a video on the Xperia ion

The Xperia ion has the same music player that we liked on the Xperia S. You're welcomed to a Cover Flow-like interface and you can swipe left and right to skip tracks (complete with a smooth 3D effect).

This is the Playing tab, the second tab available is called My Music and it's where your music library is organized. Tracks are sorted by album, artist, playlist, all tracks, SensMe channel, and favorites. There's also a link to Sony's Music Unlimited service.

The More tab offers a Headphone surround option, which can be set to Studio, Club or Concert hall. If you're not using the headphones, you can turn the xLOUD feature on, which optimizes the sound for the Xperia ion loudspeaker.

Music player controls on the lockscreen

The Sony Xperia ion is equipped with an FM radio, which has a really neat and simple interface. It automatically scans the area for the available stations and places "notches" on the frequency dial for easier scrolling to the next station. There's a Force mono option to use in case of poor reception.

The Sony Xperia ion LTE audio quality turned out decent for the most part, but its high stereo crosstalk reading came as a huge surprise to us.

The new Sony flagship has faultless frequency response and very good signal-to-noise ration and dynamic range, but there seems to be a lot of leakage between the two channels. The distortion levels are kept well under control, too. Still, we wouldn't expect anything but faultless output from a flagship smartphone like this and the Xperia ion LTE falls a bit short of the mark. 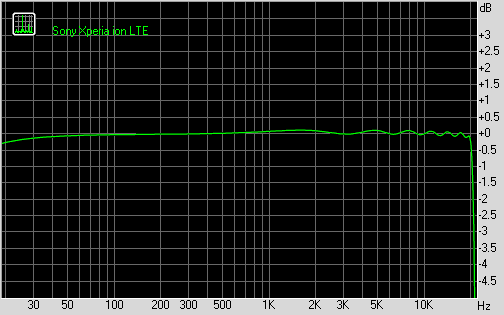