The earpiece is above the screen and to the left of it is the VGA front-facing camera, along with the proximity and ambient light sensors. Below the screen is the RGB notification light, which can use different colors to alert you to missed events and you can use the settings to customize the colors for different events. It's a bit too small for our liking, but works well enough even during the day.

Earpiece, VGA camera and sensors above the screen • RGB light

The mic pinhole is also on the front, which makes it hard to accidentally cover with your finger.

The right side of the phone is where all the physical buttons are - starting with the Power/Lock key (which looks good but is also big and easy to press), the volume rocker (which is also easy to use) and the shutter key. The shutter key was a bit of a disappointment as it doesn't provide a solid click, but it's still a great option to have.

The top and left sides of the Xperia M is where the two wired ports reside, one on each side. The 3.5mm audio jack is on top in the center and the microUSB port is on the left.

The lanyard eyelet is at the bottom of the phone and you have to open the back panel to put the strap in.

Lanyard eyelet on the bottom

While the back cover is open, you can also access the 1,750mAh battery and the microSD card slot (which you'll probably rely heavily on as the Xperia M provides only about 2GB of user accessible storage). Also here you'll spot either one or two microSIM card compartments, depending on which version of the phone you got (we have the single-SIM version).

The battery compartment, microSIM and microSD card slots are all easily accessible

Also on the back is the 5MP camera with LED flash and the loudspeaker.

The back of the Xperia M holds the camera, its flash and the loudspeaker

The phone comes in Black, White, Purple and Yellow, but we should mention that the Yellow version is not available in dual-SIM flavor for some reason.

The Sony Xperia M battery isn't that big - a capacity of 1,750mAh is nothing to write home about, but the Samsung Galaxy S4 mini (also available in single and dual-SIM versions) has a 1,900mAh battery and the HTC One mini has a 1,800mAh and both are 4.3" phones. What we mean to say is, even though it may not be much, it's ok for its class. 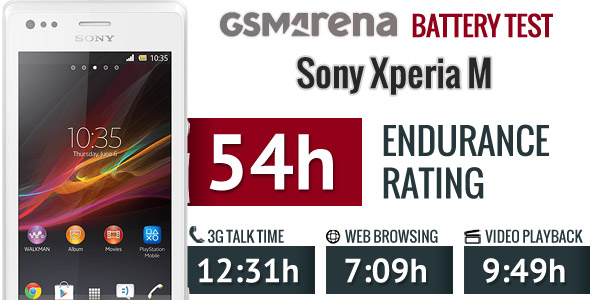 Also, the Snapdragon chipset inside has proven to be very power efficient in other phones we've tested. Again, we're testing the single-SIM version of the Xperia M. The Xperia M dual would have a second set of radio internals so it may be more taxing on the battery.