The Sony Xperia M2 ultra notified us for an Album gallery update once we configured our accounts. After the updated we got the same app that comes pre-installed on the KitKat-running Xperia Z2. Images are organized into groups of thumbnails and sorted by date. You can change the thumbnails size by pinching.

The video player does play 1080p files but only as long as those are XviD AVI files, as well as MP4 and MKV files. However DTS and AC3 audio tracks are not supported, which makes the MKV compatibility rather questionable. We know you can always get a proper app from the Play Store but it's a shame you can't just use the eye-candy default player for everything.

On the positive side the video player supports subtitles, and you can customize their looks.

Unfortunately, you cannot manually pick the subtitle file, it has to reside in the video folder to load up.

Walkman gets an update too

The Walkman music player got updated with the Album app upon the phone's initial setup too and is now the same the Xperia Z2 has. It is part of the equipment of all recent Xperia smartphones. It features Music Unlimited integration and is not above trying to sell you songs, but you can hide the Music Unlimited stuff.

The Sony Xperia M2 also features an FM Radio aboard complete with RDS support. The app offers multiple visualizations and integrates with TrackID to recognize the currently playing song.

The Sony Xperia M2 did well in both parts of our audio quality test as far as the cleanliness of its output is concerned. It demonstrated spot-on frequency response and there was no distortion in either case. The noise level and dynamic range, while not the best, are still excellent.

The only problems with the performance of the Xperia M2 were (1) the rather large bump in stereo crosstalk when we plugged in a pair of headphones and (2) the very low volume levels in both parts. You probably won't listen to anything at maximum volume with the stock headphones (in fact the smartphone will warn you against doing that), but if you have another pro-grade pair, that might turn out to be an issue. 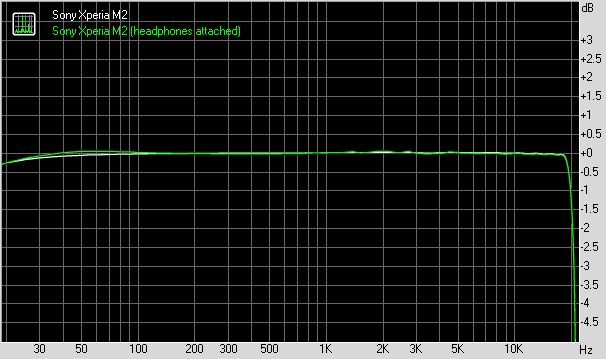