Sony began rolling out Android 4.4.2 KitKat-based firmware update yesterday for the mid-range Xperia T2 Ultra. It brought the new OS version plus updated system and Sony exclusive apps. What we missed to notice the first time is the awesome function to move apps to the SD card. 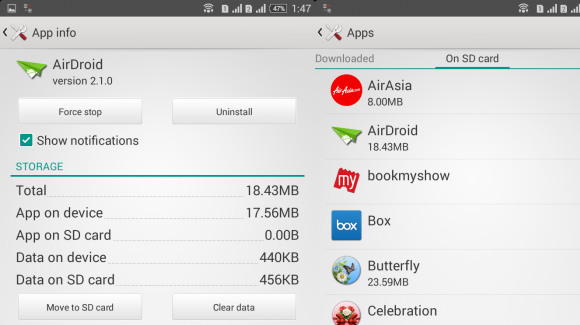 Once you go to application manager in your Settings menu and select an app, you'll notice the new Move to SD card option. There is even a new column that shows only the apps installed on your microSD card.

This particular feature is priceless for the mid and low-end phones, which come with very limited internal storage and system partition. It isn't available with the KitKat updates on the Xperia Z top lineup, but as it turns out Sony has different plans for the less-capable devices.

Currently Sony is still prepping the KitKat updates for Xperia M2 and Xperia E1 and we bet we'll see Move to SD card feature premiering on those with the new firmware as well. Maybe the KitKat-running Xperia smartphones will get it with the next update, too.

Please I really need a help.i know how to transfer apps in sd card. But my problem.is it's still not transferring and I bought new sd card just to try it again.i still have a lot of space in sd card and my phone memory is always full.my phone having ...