The Sony Xperia S and Samsung Galaxy S II cameras use fairly similar user interfaces - there is a still/video mode toggle, virtual shutter key and a gallery shortcut on the right of the viewfinder and a column of four customizable shortcuts on the left.

The customizable shortcuts are good because they let users tweak the camera to fit their particular needs - casual users will want things like scenes and effects there, while more advanced users can put manual controls there (like ISO, exposure compensation and so on).

The two phones do differ on one count - the Xperia S has a physical shutter key. It can also wake the phone if it's locked and there's even a setting to snap a photo right away.

Then there's the camera resolution - the Sony Xperia S is one of the few 12MP shooters on the market, while the Samsung Galaxy S II has an 8MP camera. To compare them, we upscaled several S II photos to 12MP (to make the resolution comparison more fair) and prepared some crops.

We're also including the Nokia N8, one of the best cameraphone on the market (even if the phone attached to the camera hasn't aged that well).

You'll find untouched full-res shots from the phones at the end of this chapter if you want to do you own comparison.

Before we begin the image quality comparison, we have to point out the difference in field of view (FoV). The Nokia N8 camera is the widest, the Galaxy S II is nearly the same and the Sony Xperia S is the narrowest. Here's a chart that visualizes the difference. 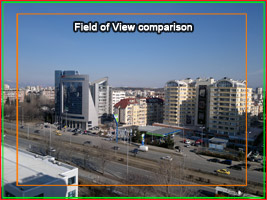 There's a tradeoff with different fields of view - wide-angle cameras fit more in the shot but a narrower FoV means that each object in view is composed of more pixels, so there's more detail in it.

The black on white text is crisper and so are the vertical bars of the railing. Even the 12MP Nokia N8 renders them softer.

A closer look reveals part of the reason - the Xperia S does quite a bit of sharpening to its photos, while Nokia has chosen to keep post-processing to a minimum. The Galaxy S II applies a lot of sharpening too. 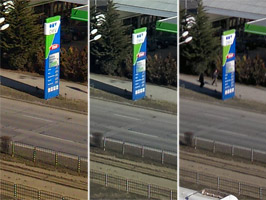 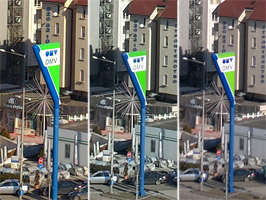 The Samsung Galaxy S II on the other hand tends to produce colder photos (they have a bluish tint) but it doesn't oversaturate colors. The Nokia N8 photos have neutral white balance and accurate colors.

The next crop has some blue sky and a good portion of it is in the shade, both of which are a very good indicators of the noise present in the photos. The Xperia S leaves some noticeable color noise in its photos - both in the sky and in the shade.

The Galaxy S II on the other hand does away with most of the noise at the cost of some sharpness - look at the Franck Muller label or the pole at the top of the building, it's nearly smudged into the background in the S II photo. 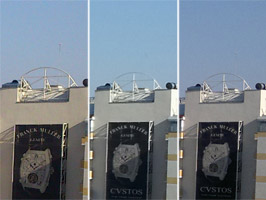 Here's another crop that has rough wall texture - a fairly random texture with small details that noise reduction doesn't handle too well. And a lot of that texture is gone in the Galaxy S II photo (the lower resolution doesn't help here either), while it's rendered excellently in the Xperia S shot.

It's visible but less pronounced in the Nokia N8 photo, but a lot of that is due to the different exposure, contrast and the extra sharpening that the Xperia S does.

Look at the white window frames too - they're tinted in the Galaxy S II photo - but upon inspection in an image editing program you'll notice that the Xperia S overexposed the highlights (as seemingly Xperia phones like to do), while the Galaxy overexposed a much smaller portion of the window frames. 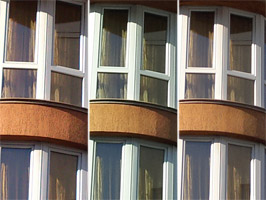 As far as features go, the two cameras are evenly matched - they both have goodies like preset scenes, face detection and smile shot, image stabilization and geo-tagging. The Galaxy S II does feature blink detection too, while the Xperia S adds 3D to its panorama and then there's the Multi Angle view, which creates a sort of lentropic card effect, which we really like.

Also, they have front-facing cameras - the Samsung offers a 2MP camera (but can't record video), while the Sony shoots 1.3MP stills or 720p video.

Anyway, here are the full-res shots, as promised: