It has a whole new interface where images are arranged into stacks of thumbnails and sorted by date. You can also opt to show all of your albums in one place. There are three tabs above the stacks - Pictures, Map and Online.

Pictures is the main tab - you can use pinch gestures to make the thumbnails bigger or smaller. Map reminds us of the iOS gallery, where all pictures with a Geo-tag are shown on a map of the world.

Video player is new too

In keeping with the new music player and gallery, Sony has added a new video player as well. It's dubbed Movies and it too has a new interface. It's connected to Gracenote, which helps you find additional information about the movies you have preloaded.

Watching a video on the Xperia SL

DivX and XviD videos support is iffy to say the least. Most of the videos we tried didn't play on the Xperia SL and it did have issues even with mp4 files. We found that there's an issue with audio playback as mp4 files with AAC sound weren't a problem. 720p videos were handled with ease, 1080p videos were also watchable but not all of them. Overall, we suggest converting all your movies into the appropriate format or just downloading a video player off the Google Play Store with support for more video codecs.

To complete the trio of redesigned Sony apps is the new Walkman music player. It retains all the functionality of the older music players but adds a little bit extra here and there.

In the My music section, you can update your album art and music information like album, year, and more. SensMe is included, meaning you can filter your songs by type - upbeat, energetic, mellow, dance, etc. Creating playlists is enabled and you can also view your Facebook buddies' activity if they too use the Walkman player.

Currently, the only available visualization is the album art.

While the rest of the music player is the same as what we saw on the neo V, this one adds music controls to the lockscreen. Swiping them either side brings back the clock. The notification area also offers the now playing screen with music controls and the option to jump into the Walkman player.

The Sony Xperia SL also features an FM Radio aboard complete with RDS support - an improvement over the Neo L, which had no FM Radio at all.

The Sony Xperia SL did excellently in the first part of our traditional audio quality test. The smartphone got very good scores all over and if it wasn't for the only average volume levels it would have been perfect.

There's some degradation when you plug in a pair of headphones, but things certainly aren't too bad. The stereo crosstalk rises and some distortion creeps in. Volume levels remain about the same, though, which is not a common sight among smartphones. A solid overall performance, which should please anyone but the most demanding audiophiles. 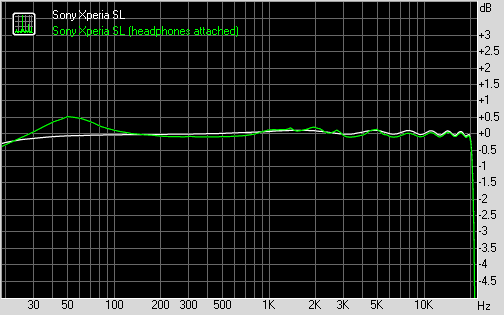