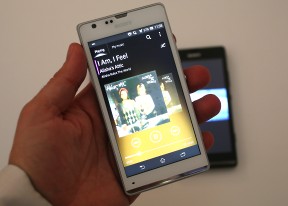 Beginning with their NXT line of devices last year, Sony introduced a new take on the notification LED in the form of an illuminated strip. While it's not something particularly groundbreaking, it did freshen up a design scheme that was beginning to get a little stagnant.

With the Xperia SP, the see-through LED strip makes a comeback, this time located at the bottom of the smartphone, right above the a co-molded aluminum frame that adds to the handset's solid build. The frame goes all the way around the sides of the device and features no edges or gaps.

At 155 grams, the Xperia SP gets the balance right between comfortable handling and reassuring heft, and the 4.6" diagonal makes the package distinctly more manageable than 5-inch flagships.

The device comes in black, white and red paintjobs, and the since the light strip is transparent, it's equally visible from the back as it is from the front.

A cool upgrade to the transparent strip is the option to set it to act as a visual caller ID - illuminating in particular color, depending on who is calling you. Since its also visible from the back you will easily be able to tell who is on the other end of an incoming call even when the Xperia SP is lying face down on a table.

As is consistently the case with Xperia smartphones, the display viewing angles are not among the best we've seen. Otherwise, helped by the Mobile Bravia Engine 2, the picture quality isn't bad at all. The limited viewing angles might cause some trouble if you plan on sharing the screen with your buddies.

On the back, the 8MP camera is the star of the show, alongside a small speaker grille and an LED flash. As we mentioned before, the shine of the LED strip is visible from the back as well.

Almost all the action is packed on the right hand side of the device, where the volume rocker, power/lock button, and... yes, a dedicated camera key reside. That's a welcome addition as phones with hardware camera keys are hard to come by these days.

The Xperia SP has a solid all-round build

The Android user interface on the Xperia SP provides the standard flavor of Jelly Bean, though not without some Sony custom touches to it. You get an array of nifty Sony media apps like Album, the Walkman music player, and Movies. The interface has come a long way in recent years, and while it is not as customizable as, for example, HTC's Sense UI, it is still aesthetically pleasing.

Sony's midrange offerings have consistently delivered top value for money in the past two years and the Xperia SP follows in the same footsteps. With the right price tag, it has the potential to be one of the most enticing offers in the midrange segment, regardless of the manufacturer. We can't wait to get the Xperis SP for a little while longer, so we can put it through its paces.