The Sony Xperia SP comes with a 4.6" TFT screen of 720p resolution, which is the new norm for the mid-range. The pixel density adds up to 319ppi, which is enough to get into Retina territory and make everything appear tack sharp. It's no 1080p beast, but at this size the difference is pretty hard to spot with a naked eye.

The TFT screen is backed by the Mobile BRAVIA Engine 2, which enhances contrast and sharpness, brings down noise and saturates colors to make them more pleasing to the eye. The reds in particular tend to really pop out.

The contrast is only average and colors are hardly the best around. Brightness levels are pretty decent, though.


There are also the subjects of viewing angles. The Sony Xperia SP isn't the best performer in that aspect with color shifting and contrast loss occurring the moment you start tilting the screen.

Finally, the sunlight legibility on the Sony Xperia SP is mediocre, meaning that in brighter environments you might need to work a bit harder to find a proper angle for working with the smartphone.

The Sony Xperia SP has a pretty standard set of controls as far as the latest smartphones by the Japanese company go. The smartphone relies on virtual buttons, so understandably there are no keys beneath the display. All you can find there is the primary microphone and the transparent antenna which doubles as an illuminated notification strip.

The VGA front-facing camera is joined by the earpiece, the ambient light sensor and the proximity sensor above the screen.

The VGA front-facing camera is in the upper left corner

The left side of the phone features the bare microUSB port. The lack of protective cover facilitates usages, but can lead to some dirt accumulation with time.

On the right, you'll find the volume rocker near the top, the power/lock button (of the signature Xperia variety) and a two-step camera button.

We always appreciate a dedicated camera button on a phone, even more so when talking decent snappers. The shutter button on the Sony Xperia SP has good feedback and distinct half-press, although ideally it would have been a bit wider.

There are three keys on the right

The top of the Sony Xperia SP only features the 3.5 mm headphone jack.

The audio jack is on top

The bottom is completely bereft of functional elements.

There's nothing to see at the bottom

The back panel of the Sony Xperia SP is user-removable, but even so you don't get access to the 2370 mAh battery. All you get underneath the plastic cover is the hot-swappable microSD card slot and the microSIM slot.

The back panel is removable but the battery isn't accessible

As far as battery life goes, the Xperia SP posted some very good numbers, even beating out the likes of the Xperia Z and ZL flagships. The Xperia SP achieved a score of 51h in our endurance rating, suggesting that it can last for more than two full days on a charge if you use it for an hour of web browsing, an hour of video watching and an hour of telephony per day. 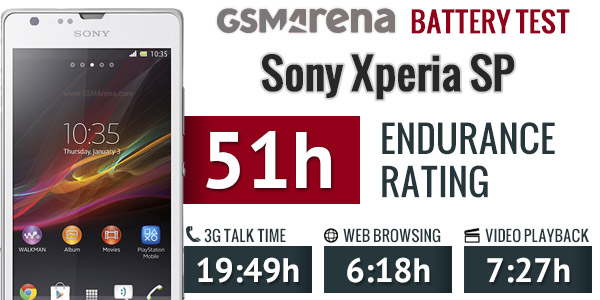 More info on the test can be found here.

Sony has done well to make the Xperia SP easy to handle despite its relatively large for the class dimension. The controls are all nicely placed and easy to press, so none of them causes any usability issues.