The Sony Xperia SP comes with the new Sony gallery, called Album. Images are organized into stacks of thumbnails and sorted by date. You can opt to show all of your albums in one place, and there are three tabs above the stacks - Pictures, Map and Online.

Eye-candy video player, plays everything but chokes on AC3

The Xperia SP did splendidly with almost any file type and video codec we threw at it, including DivX and XviD, even MKV. The only exception was AC3 audio support - videos with this audio codec did not play at all.

Watching a video on the Xperia SP

A video editing app called Movie Studio is bundled too. It lets you edit video, images, and audio together (both imported from files as well as recorded/taken by the device itself), using a variety of cool transitions. You can then export the resulting project into a video file that you can share using the SP's generous connectivity features (more on this below).

And audio fans will be pleased as there is a configurable 5-band equalizer with bass adjustment. However dedicated audiophiles might want to consider alternatives off the Play Store, with support for 10 or even 20-band equalizer.

The Sony Xperia SP also features an FM Radio aboard complete with RDS support. The app automatically seeks and bookmarks stations in range, although you'll need to have a set of headphones attached to use as an antenna.

Google's own music player called Play Music is onboard as well.

The Sony Xperia SP performed excellently in the first part of our traditional audio quality test and was about on par with the high-end Xperia Z and ZL. The smartphone got great scores all over, and if it wasn't for its below-average volume levels, it would have been pretty great.

There's some degradation when you plug in a pair of headphones, but things certainly aren't too bad. The stereo crosstalk rises notably and some distortion creeps in. Volume levels remain pretty low, but the overall performance is still quite good. 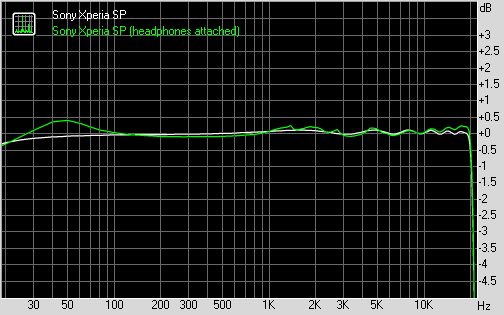