The video player is dubbed Movies and it too has a new interface. It's connected to Gracenote, which helps you find additional information about the movies you have preloaded - although it identified our version of The Mask not as the famous Jim Carrey flick, but rather a horror movie from 1961 by the same name.

Watching a video on the Xperia T

The Xperia T did a very good job with almost any file type and video codec we threw at it, including DivX and XviD. The only glaring exception was videos with AC3 audio, where we got no sound, although the video still ran fine.

A video editing app called Movie Studio is bundled too. It lets you edit video, images, and audio together (both imported from files as well as recorded/taken by the device itself), using a variety of cool transitions. You can then export the resulting project into a video file that you can share using the T's generous connectivity features (more on this below).

Another of the redesigned Sony media apps which has gotten a facelift is the new Walkman music player. It retains all the functionality of the older music players but adds a little bit extra here and there.

While the rest of the music player is the same as what we saw on Sony Ericsson handset, this one adds music controls to the lockscreen. Swiping them to either side brings back the clock. The notification area also offers the now playing screen with music controls and the option to jump into the Walkman player.

The Sony Xperia T also features an FM Radio aboard complete with RDS support. The app automatically seeks and adds bookmarks to stations in range, although you'll need to have a set of headphones attached to use as an antenna.

The Sony Xperia T performed pretty well in the first part of our traditional audio quality test. The smartphone got very good scores all over and garnished them with average volume levels, making up for one of the good performances we have seen.

There's some degradation when you plug in a pair of headphones, but things certainly aren't too bad. The stereo crosstalk rises and some distortion creeps in. Volume levels remain about the same, though, which is not a common sight among smartphones. A solid overall performance, which should please anyone but the most demanding audiophiles. 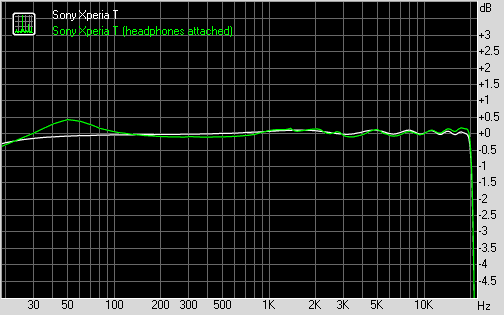