The bigger, the better

The Sony Xperia T2 Ultra flaunts a 6.0" IPS Triluminos display of 720p resolution, which works out to 245ppi. While this is nowhere near the 400+ pixel density of current flagships, we should not forget that it's a completely different price range we're talking about.

The Xperia T2 Ultra display is enhanced by the Sony's Mobile BRAVIA Engine 2 and not the latest X-Reality engine. It aims to improve sharpness, reduce noise, while boosting contrast and saturation, and it does a pretty good job of it.

The pixel arrangement is standard RGB with an equal amount of green, red and blue pixels in a line. Below you can see it magnified using our trusty microscope. 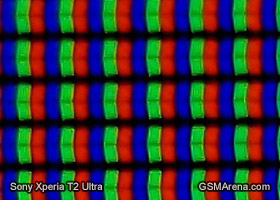 The contrast and brightness of the screen are very nice, color reproduction is great too, all adding up to an excellent image quality screen. The viewing angles, thanks to the IPS matrix, are very good too with little color washing.

Unfortunately the screen, even with turned the Auto Brightness setting off, continues to changes the brightness level according to the ambient light and the picture thus we can't do our tests at 50%.

Unfortunately, the sunlight legibility is rather mediocre. If you are using the phablet outside and it is sunny, you'll have a hard time.

The Sony Xperia T2 Ultra has pretty much the same controls as the Xperia Z Ultra. There's, typical of Sony, some more space than necessary above and below the 6" display. That's particularly true for the bottom, considering the main controls are on the screen itself. Above the screen, the 1.1MP front camera and the usual sensors are placed around an etched out earpiece that easily gathers dust.

A peek above and below the Sony Xperia T2 Ultra display

This mouthpiece is the only thing of note below the screen. Just like the earpiece, it's carved out of the sheet of glass and can fill with dust over time.

The sides of the Xperia T2 Ultra are quite busy. The unprotected microUSB port and the microSD card slot covered by a plastic lid are on the left.

The right side features the 3.5mm audio jack, the sealed microSIM compartment, the signature power/lock key, plus the thin volume rocker and a camera key. A hat tip to Sony for bringing the camera control back!

By the way, there is a pull-out tag with the regulator-mandated certifications just below the microSIM bed. This is a very clever way to have those mandatory inscriptions without engraving them into the casing.

What's on the right

The Xperia T2 Ultra has no controls and ports at the top and bottom.

The top and bottom are completely bare

The Sony Xperia T2 Ultra glossy back has the 13MP camera lens coupled with a single LED flash. The prominent speaker grille is near the bottom.

The camera and the loudspeaker at the back

A 3000mAh battery is officially quoted at up to 24 hours of 3G talk-time or 1046 hours of 3G stand-by. Those numbers sound impressive, better than the Xperia Z Ultra's official ratings, but we are more interested in finding out how long the smartphone lasts when the screen is turned on and the quad-core chipset is not idle.

The Xperia T2 Ultra managed to output amazing battery life, much better than the Xperia Z Ultra. Note that we tested the device without using the STAMINA mode, or any battery enhancement whatsoever. The score of 96 hours means the T2 Ultra will last four days on a full charge with an hour each of calling, browsing and watching video daily. Disclaimer: Have in mind that the excellent web browsing and video playback times scores have probably benefited from the phones's constantly active auto brightness setting even when we explicitly turned that off. We usually set the screen brightness at 50% for all phones, but there is no way of preventing the Xperia T2 Ultra from toning it down as it pleases.

For a more detailed breakdown of the Sony Xperia T2 Ultra battery performance check out our blogpost.