The bigger, the better

The Sony Xperia T2 Ultra comes with the custom Sony gallery, called Album. Images are organized into groups of thumbnails and sorted by date. You can change the thumbnails size by pinching.

The gallery can connect to online albums (PlayMemories, Facebook, Picasa, Flickr) along to other devices on the local network. Maps and Globe albums are also available, which use the geotagging info to sort photos by the location at which they were taken, and faces, which groups photos by the faces of the people in them.

Beautiful but not so powerful video player

Unfortunately there is more bad news - the video player does plays 1080p files hassle-free but the supported codecs are limited to Xvid, MP4 and MKV files. DTS, DD and AC3 audios are not supported, which makes the MKV compatibility pretty much obsolete. We know you can always get a proper app from the Play Store but it's a shame you can't just use the eye-candy default player for everything.

On the positive side the video player supports subtitles, and you can customize their looks. Unfortunately, you cannot manually pick the subtitle file, it has to reside in the video folder to load up.

The Walkman interface is based on tiles that sort your music collection by Artist, Albums, Playlists, all songs and even the songs your friends are listening to (but you need to connect the player with your Facebook account).

The Sony Xperia T2 Ultra also features an FM Radio aboard complete with RDS support. The app features multiple visualizations and integrates with TrackID to recognize the currently playing song. You can even directly send an "I'm listening to..." post to Facebook.

The Sony Xperia T2 Ultra's audio output is decent for its mid-range standing. It's not the best portable player around, but its output will do just fine for the majority of users.

The phablet produced very clean output in the first part of our test, but it was let down by its volume levels, which were below average. Excluding that, its output has good frequency response, low noise levels, and there is no distortion whatsoever.

Plugging in a pair of headphones causes an average spike in the stereo crosstalk and adds some intermodulation distortion, but that's hard to detect outside lab conditions. The frequency response is slightly affected too, but again, it’s nothing major. The volume levels are once again the real disappointment here and while the dynamic range and noise level scores are still great, we can only give the Xperia T2 Ultra a satisfactory mark here. 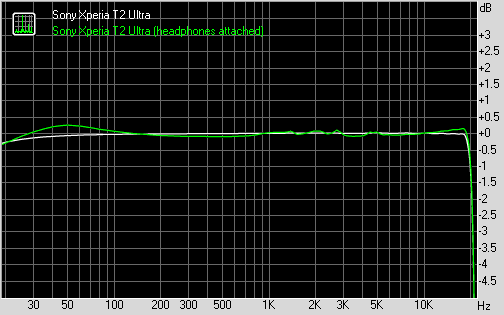