However, there are two things to consider here - the Sony Xperia Tablet S BRAVIA screen is of the rather unorthodox size of 9.4", as opposed the 10.1" LCD on the other two. The 15% difference in screen estate doesn't put the Xperia Tablet S in a new category, but is still big enough to be evident in everyday usage.

Also, the folded magazine design brings the thickness of the tablet at the top end to 11.9mm. This one is actually much less of an issue as the tablet is as slim as promised for the lower two-thirds of its body and that's where your hands sit most of the time anyway. The extra depth makes the tablet top-heavy though, which is something to consider. On the other hand, the folded bit provides excellent grip in portrait orientation.

Overall, we think the Sony Xperia Tablet S easier to wield and carry than just about every 10" tablet, but still not light enough to be considered much more than a couch device. Prolonged use is guaranteed to tire your hands and you'll be looking for a place to rest against in a matter of minutes, despite the lowered weight.

As for the design - Sony like to joke that the folded-magazine styling is lawsuit-proof. We've heard that one on at least two separate occasions and it's one of those things that don't usually sound as good the second time around. The last thing you would want anyway is have lawyers tell the designers what to do.

To be clear, we don't think this was the case here. Sony just likes to point out that their R&D department came up with something that looks vastly different from anything on the market and yet still works. Okay, maybe not vastly different, after all there's only so many ways to do a glass front panel with a huge screen in the middle, but the back is instantly recognizable.

And while making an impression is one thing, making a good impression is a whole other story. Luckily Sony has nailed that one too and we quite like the Sony Xperia Tablet S. The folded bit at the back even enables easier (and more secure) attaching of carrying cases like the official cover that Sony sells as an optional accessory.

The only part of the design we are not too sure about is the fact that the folded piece is made of black textured plastic, while the rest of the back panel is smooth aluminum and the two don't go too well together. We are not saying it's bad, but there's certainly room for improvement.

The front panel of the Sony Xperia Tablet S is dominated by the 9.4" BRAVIA-powered display of WXGA resolution. The screen tends to be pretty reflective, which leads to rather poor sunlight legibility, but has pretty good image quality indoors.

The contrast and colors are good and the screen is reasonably sharp. It doesn't come anywhere close to the 1080p screens out there and the iPad 3 Retina, but it's doing fairly well for within the WXGA category.

We were also able to put the display under our digital microscope for a closer look at the pixels. Check it out: 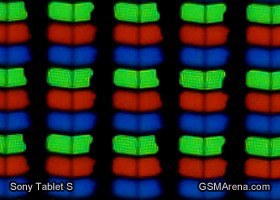 The display under a microscope

The 1MP front-facing camera is located in the center above the display, when you hold the tablet in landscape mode. Alongside it is the ambient light sensor, which enables automatic screen adjustment.

The power/screen lock button is located on the right side of the Sony Xperia Tablet S, next to the volume rocker.

The power key and the volume rocker sit on the right

At the other end we find the SD card slot, which is hidden under a small plastic flap and the 3.5mm audio jack. You read that right - the Sony Xperia Tablet S features a full size SD slot, rather than one of the microSD variety.

The 3.5mm audio jack is next to the SD card slot

On one hand this allows for even cheaper memory expansion, but on the other hand this means that you can't simply insert the microSD card from your smartphone in your tablet. You can simply have an adapter pre-inserted in the slot to solve this issue, though.

The fold of the Xperia Tablet S on top is deprived of any functional elements, while at the bottom you get the stereo speakers and the Sony proprietary connector. Yet another proprietary connector is hardly great news and we really hope Android manufacturers will finally follow Google's lead with the Nexus 7 and start putting microUSB ports on their tablets.

The stereo speakers and the proprietary jack at the bottom

We conclude our hardware tour at the back, where we find the 8 megapixel camera lens. There's no flash here, so don't expect to get any kind of usable shots in low-light conditions, but since tablets (let alone 10-inchers) are by far not the most comfortable devices for taking photos we won't be deducing any points here.

Underneath the metal back panel sits a 6000 mAh battery, which Sony says is capable of lasting for up to 12 hours of usage on a single charge. The number sounds quite good, but since we didn't get to spend enough time with the slate we are unable to confirm if it's achievable in real life.

It's now time we move on the Sony Xperia Tablet S user interface. Sony has backed in some interesting tricks in the Android 4.0 ICS interface and we'll not get to see if those work as advertised.