Our Xperia XA1 review unit arrived in a plain white cardboard box typical of the Xperia Xs. There are colors underneath the lid, but with a dominant black. It's not the explosion of color we were treated to on previous Xperias.

Inside, we found just a charger (a plain 5V/1.5A one, at that), and a USB-A to USB-C cable. Sony's retail bundles do vary by market and even between carriers in the same country, so ask what you're getting before you buy.

Box contents aside, the phone should be the same regardless of locale. The Xperia XA1 measures 145 x 67 x 8.0mm, which is a little larger than the predecessor in all three dimensions. The 1.4mm increase in height may be small, but is really unnecessary. The original XA was already past the ideal height for its display size, and now the XA1 has grown even taller.

Giving credit where it's due, the XA1 is still pleasantly narrow, which is the more important metric when it comes to how single-handed use feels.

At 143g, the Xperia XA1 is some 6g heavier than the outgoing model, which makes a difference on the spec sheet, but not in day-to-day use.

The Xperia XA1 is a typical Sony design. That's been our opening line, one way or another, with pretty much every Xperia that came our way in the past few years. Depending on how you look at it, that's either Sony continuously refining a formula that works, or a refusal to keep up with the times. 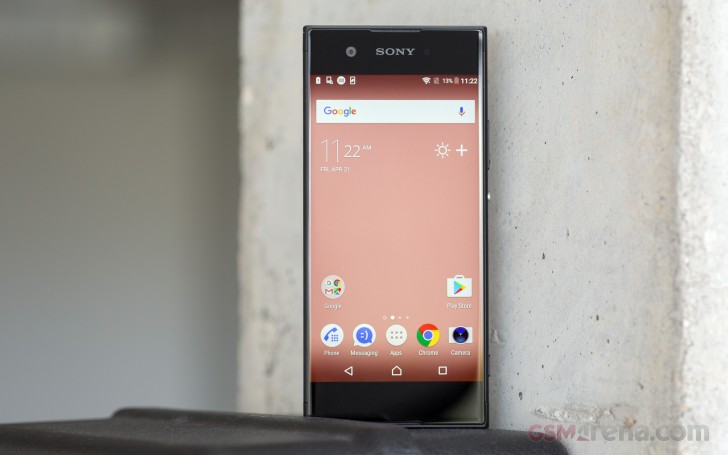 In any case, it should be the flagships setting the trend, so if the XZs is boxy, we can't blame the XA1 for being that way either. If anything, the XA1 is actually better fitting in today's world of bezelless, infinity, edge-to-edge (or whatever they call them) displays.

The XA1 is half-bezelless, if you'll allow us - what Sony calls borderless design refers to the sides only. The minimal frame left and right means there's very little phone on either side of the display which lets you reach almost the entire display area. Okay, the far top corner is out of bounds, you'll need to readjust your grip a little or use both hands. 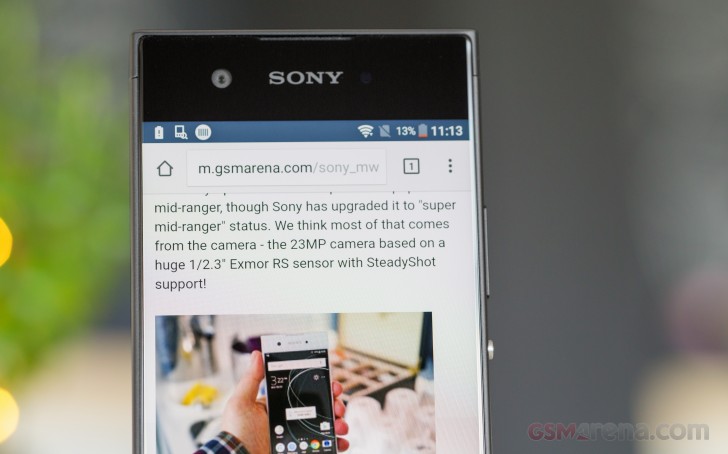 You'll be gripping aluminum on the sides too, which is always a good thing. The sides are nicely rounded and symmetrical on both front and back, while their mid portion is flat enough to provide plenty of surface to hold on to. The phone certainly feels solid, and yet modern and expensive.

What the XA1 lacks in side bezels, it more than makes up for in chin and forehead. A seemingly huge strip of solid black is below the display, with nothing other than a "speaker slit" at its bottom. Ah, we almost had you fooled - there's no speaker in there, it's just for symmetry.

Up top you have an equally large chunk of black, though since it's readily apparent what it's being used for, we're more inclined to forgive its existence. The same slit is here, only with an earpiece to justify it. To its left is the 8MP selfie camera and a status LED further towards the edge, while on the other side is the ambient light/proximity sensor pair.

Now, we realize that a narrow phone has limited room for the innards and it may not be the best decision to go thicker instead of taller. But we can't help but wonder if that's indeed the case.

On top of that, this year's Sony aesthetic is all about those sharp corners. On the original XA they were rounded, and that softened the impact of the bezels a bit. Plus, the old phone was objectively 1.4mm shorter.

Perhaps the silver lining here is that the body's tall aspect ratio is quite convenient when you are making calls and you have the phone to your ear. It's just a little thing you appreciate only when you start using it.

Around the back, you'll find an Xperia badge etched in the center. The NFC logo is printed here too, to inform you where the antenna is. Sony switches its placement depending on rear panel materials; metal-backed Xperias have it to the left of the earpiece.

The star of the show, the 23MP flagship-grade camera, is in its customary position in the top left corner. The ring around the glass is slightly raised to give the lens some extra protection. A single LED flash is here to assist in low light. What's missing is a laser autofocus window (no laser autofocus here) and the RGBC-IR sensor that aims to help with white balance - in effect, the camera setup is the same as on the Z5s, the Xperia X and X Performance.

The back's matte finish does attract smudges, and it's not all that easy to clean. But the marks are also not particularly easy to see, so you're safe. 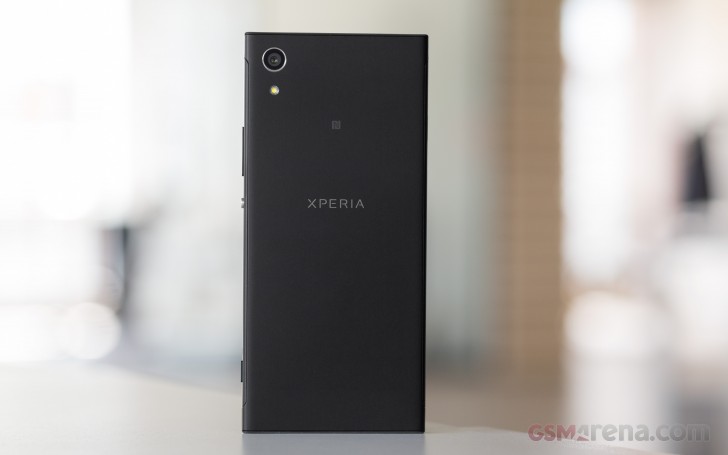 A welcome change with this model places the controls on the right and they're arranged in a more usable way. What was an uncomfortably low position for the volume rocker below the power button has been been scrapped in favor of a much more ergonomic placement above. The Xperia XZs didn't get any of that, so here's an area where the midranger is better than the flagship.

Not so in terms of fingerprint recognition. The XA1 can't do that, and gets a small circular power button where the XZs would sport a fingerprint reader. Oh, well. 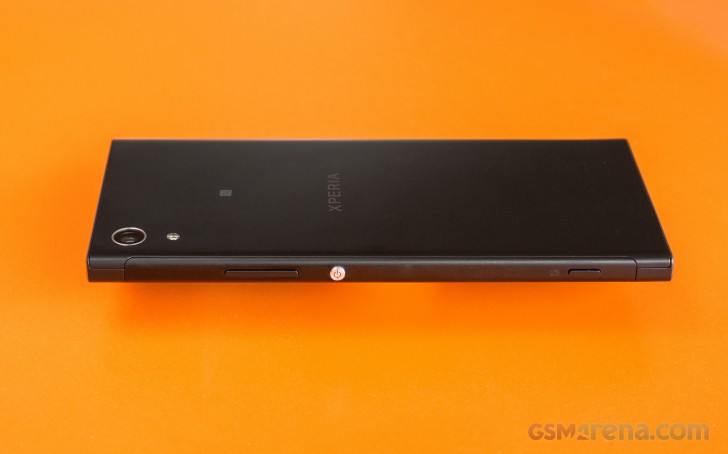 There's the two-stage shutter release button though - Sony's sticking to that signature feature of the Xperia line while the rest of the world is tapping on screens to take a shot. It does double as a shortcut to the camera, though, so there's that.

On the left side of the phone you'll find the card slot which couldn't possibly have had a more flawed logic - mind you it's not a hybrid slot, it's just a lid that covers two independent card compartments. The thing is the SIM tray is attached to the lid. So, if you pull the lid the SIM card will come out with it, at which point the phone will inevitably restart. The microSD card can then be removed, and you can then put the SIM back in, at which point, you guessed it, the phone will inevitably restart again. How about, and that's a very humble suggestion, you take out the microSD card with the tray, and the SIM card stays in?

On the bottom there's the USB-C port, microUSB is no more even in Sony's midrange. It's just USB 2.0 though, so transfers are capped at a theoretical 480Mbps. The actual speaker is here too.

Up top you'll find the 3.5mm jack and the secondary noise-canceling mic - nothing out of the ordinary.

USB-C and a speaker on the bottom  That's the only speaker  3.5mm jack on top