The IMX400 is the same module that appears on the XZ Premium, XZs, as well as the XZ1 pair. But Sony has worked hard to improve the software processing, and its image processor helps too, so the XZ2 is not without upgrades in its camera department.

Some may consider the lack of a dual-camera as a disappointment, though at least we now know such setup is coming finally on the Xperia series this fall. 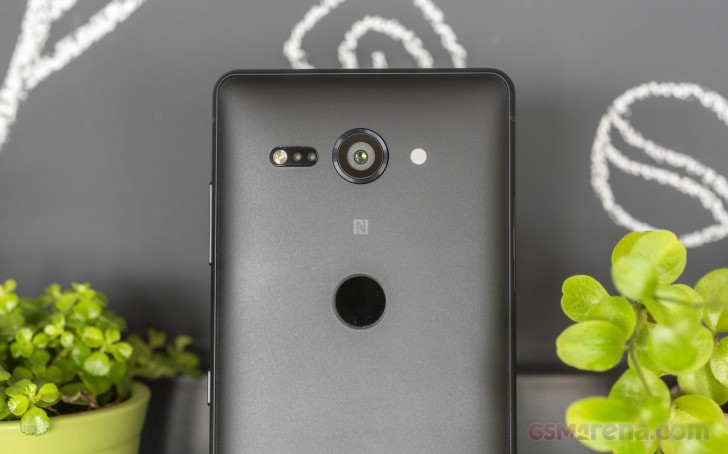 One thing that is part of the XZ2 and XZ2 Compact camera packages is Sony's excellent RAM chip solution, sandwiched right in between the sensor and control circuitry layers. It serves as an ultra-fast buffer where the camera can temporarily offload what the sensor captures without the need to wait for the storage to catch up.

This lets the sensor reads out the full 19MP resolution really fast, which prevents the nasty rolling shutter in photos of fast-moving objects. It also enables the headline feature - 960fps slow-motion video. Now, thanks in part to a hardware and software collaboration with Qualcomm on the Spectra 280 ISP, inside the Snapdragon 845, the slow-motion resolution has been bumped up to 1080p! Unfortunately, at half the slow-mo burst length, but more on that in a bit.

There haven't been any radical changes to the Xperia camera UI in some time now. Well, that does depend on when you've last looked into it. For instance, a while back, Sony finally moved the 4K video recording into the resolution settings, as opposed to being a separate mode.

Speaking of resolution settings, you might want to go into settings and switch the default 17MP (16:9) one to 19MP (4:3), so you can get the highest possible resolution for your photos. The is also Sony's familiar Manual mode. It is full-featured, with access to shutter speed (1s max), ISO as well as white balance and exposure compensation.

And if you find the lens distortion of the XZ2 wide angle lens not to your liking, you can also experiment with the correction option. It does reduce the still quality a bit, though.

Predictive Capture is here to stay, though it works as rarely as before. When the camera detects fast-paced movement, it records a few of the moments before you press the shutter. So, if you were late in clicking the shutter button, you could be able to use one of those pre-cached shots instead.

There are also some new features in the 3D Creator app, which now can use the rear or the front camera. If you haven't heard of it, it's a software that lets you create three-dimensional captures of objects. Facebook has now stepped in to simplify the sharing process. You can upload your creations to the site directly, where they can be viewed in all their 3D glory without any additional software.

Making a scan of your face and head with the newly added support for the selfie camera is even more fiddly and frustrating than having somebody hover around you for a few minutes. On the plus side, however, this could hint that there are no real hardware requirements for the system to work, making it potentially portable to other devices.

When the light is good, the XZ2 Compact resolves plenty of detail, slightly more than on previous Xperia flagships. Sony's color science hasn't changed much - colors are reproduced very accurately, and the dynamic range is pretty wide. The Auto mode successfully recognizes the scenes and uses Backlight where needed, so we didn't need to use the Manual mode for HDR, ever.

Noise suppression artifacts are abundant, though, even if the lighting was great. If you downscale those images to 12MP or less, that becomes less noticeable. That's a pretty common trait for the 19MP motion camera, and other high-resolution cameras for that matter, along with the slight distortion in the corners, caused by the wide lens.

The new noise-reduction system dials back a bit and thus producing a more coarse and grainy rendition of noise but the level of the resolved detail is now higher. In low-light, the difference is even more pronounced with photos coming out looking substantially sharper and with better colors. 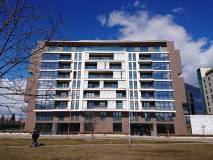 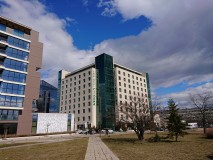 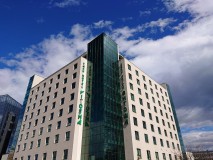 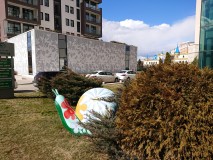 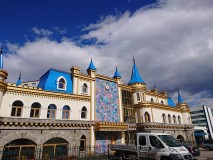 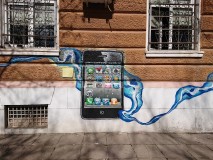 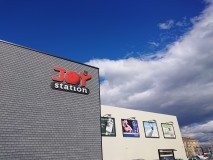 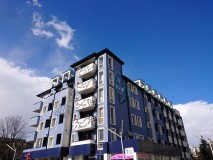 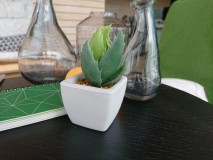 There is manual HDR mode available in, well, Manual mode, but its switch is hidden in the advanced settings. Intelligent Auto is doing a good job, though, so you will rarely, if ever, need to switch to Manual only to shoot HDR. 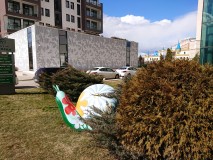 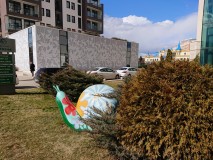 As we mentioned before, low-light is where the new BIONZ platform seems to shine the most. Historically, this is where 19MP Motion Eye Xperia's have struggled a lot. The XZ2 still has to battle the lack of OIS, so a tripod will always yield better results even at Auto mode. But even without one, the new Multi-Frame noise reduction seems to do a better job, compared to earlier Sony algorithms.

Now, the XZ2 Compact low-light samples are less noisy, richer in detail, and the ISO rarely hikes above 1250. 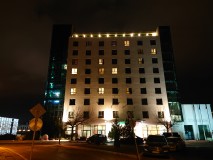 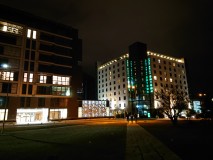 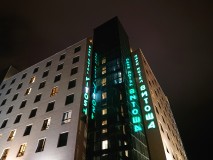 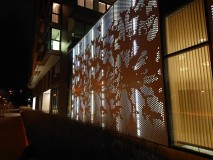 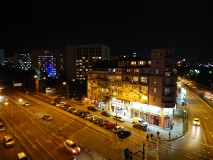 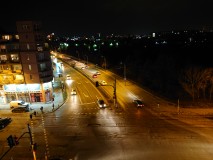 Involve a tripod, and things get even more interesting.

The tripod detection appears to be better optimized on the XZ2 and XZ2 Compact, and the new software feels comfortable pushing the shutter speed even lower. For instance, our Superior Auto in-studio test shot was taken at ISO 200 and a 1/8s shutter speed - camera settings which previously were achievable only through manual mode. Resting the phone carefully on a level surface can yield the same results.

It's worth mentioning that when the XZ2 Compact's Auto mode decides on longer shutter speeds (0.5s - 1s) because of that tripod detection, it will take a total of six seconds to capture that shot. We can only assume that's the Multi Frame noise reduction, asking for six 1 second, or so, shots to work with. If you don't really feel like waiting, using manual mode seems to skip to lengthy process, only capturing one single shot with your desired settings. 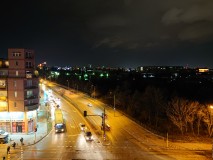 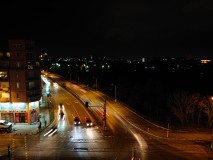 We snapped the same low-light scene with the Xperia XZ2 Compact and the XZ1 Compact. Comparing the two shots side-by-side reveals the much awaited improvement in Sony's BIONZ algorithms.

The new multi-frame noise-reduction does a wonderful job, but it also pops more detail whereas previously impossible even when mounted on a tripod.

Naturally, we shot our standard posters with the Xperia XZ2 as well. You can use our photo compare tool to see how it stacks up against competitors. 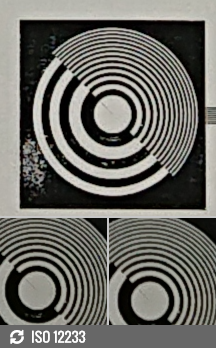 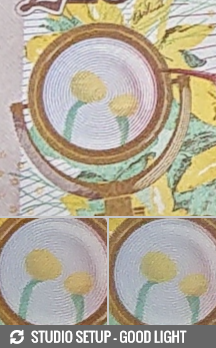 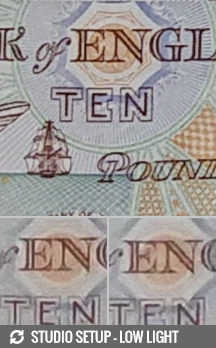 The panoramic shots have a height of up to 3,600 pixels. The resulting angle of view is up to you since you can stop the capturing process at any time. You do get plenty of detail and practically no stitching artifacts unless you shoot moving objects.

Sony has offers a Bokeh app on the XZ2 Compact as part of its Xperia suite. Since the phone only has one camera, it operates the old-fashioned way - by taking a pair of photos and then allowing the user to adjust the focus, blurring the rest, as best it can. Sometimes it works well if you line up your shot correctly, and sometimes it just doesn't. Also, you have to be really close to the subject, 1 meter or less.

The selfie camera on the XZ2 Compact did take a hit in specs, likely associated with the new design with slimmer bezels. Resolution is down to 5MP (f/2.2, 1/5"). There is no autofocus either.

We can't complain about any lack of details. Samples came out nice and sharp and dynamic range is also decent. So, the only real bummer is the fixed focus. You can also enable/disable the beautification enhancement from Settings.