Just how compact is the Z1 Compact? The device weighs in at 140g - some 30 grams lighter than the Z1, and manages to shave off just over 9mm in width and 127mm in height. At 9.5mm, it is 1mm thicker than the Xperia Z1, likely due to them having to cram in a relatively large battery in such a small space.

One of the few areas where the Z1 Compact differs from the Z1 is in display fidelity. Obviously, the Z1 compact has a smaller screen diagonal, but doesn't match the flagship's 1080p resolution either. Nevertheless, the 4.3-inch 720p IPS panel results in a more than acceptable pixel density of 341ppi, and features Sony's Triluminous display tech for some very sharp imagery.

Above the display lies the 2MP front-facing camera and the usual array of sensors.

The display panel is decently sharp

Overall, the design and layout of controls are exactly the same as on its elder brother. We were able to get our hands on both the black and white versions of the handset.

On the left side you'll find the same pogo pin dock flanked by a microSIM, microSD, and USB card slots, while on the right is the familiar rounded power/lock button, a volume rocker, and a dedicated shutter key.

Up top lies the 3.5mm headphone jack, while the bottom is bare save for a large loudspeaker grille.

The top and bottom are also a familiar sight

Around back you'll find the lens of the same 20.7MP primary camera, LED flash on the side, covered by the stylish glass sheet that's been a staple of the Xperia line for the past several years.

The same 20.7MP shooter is featured on the back side

The Xperia Z1 Compact will premier in several color combinations, only a few of them seen in a Sony smartphone thus far.

The Z1 Compact will come in Pink, Lime, and Yellow as well as the traditional Black and White

In-hand, the Z1 Compact is exactly what we imagined a miniature flagship from Sony would be. The great Xperia build quality has made its way here, while the smaller screen diagonal makes for easier one-handed use, as the thumb of your carrying hand is able to easily touch almost all areas of the screen. The compact size also makes for great pocketability, which is one of the biggest issues we have with most 5-inch, or bigger, smart devices.

Sony is planning to release its new Xperia Bluetooth headset - the SBH80 - alongside the Xperia Z1 Compact. It's set to hit retail at €99.

The SBH80 Bluetooth headset will be released alongside the Z1 Compact

From a software standpoint, the Sony Xperia Z1 Compact will run Android 4.3 Jelly Bean out of the box - the same build that's on the Xperia Z1. Since the software on the Z1 Compact was not yet finalized for our hands-on, we weren't even allowed to snap screenshots of the interface, but we were told it will be identical to that of the Xperia Z1. 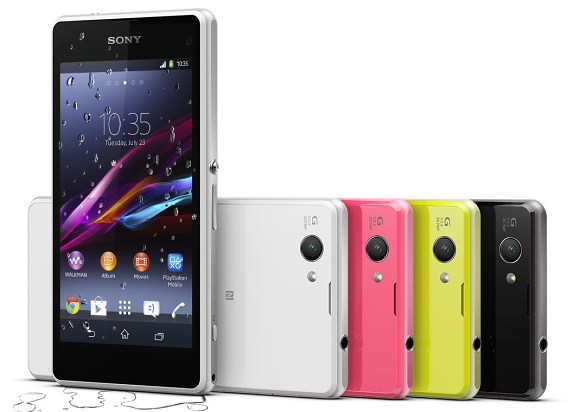 Despite some kinks that need to be ironed out, the performance we experienced during our time with the Sony Xperia Z1 was flawless. The 2.2GHz quad-core Snapdragon 800 processor with a robust GPU and 2GB of RAM have all the makings of a genuinely powerful compact device.

The Z1 Compact is the first genuinely capable compact droid that doesn't require you to sacrifice the performance, display fidelity, and battery life found on high-end devices. We commend Sony for being the first manufacturer to respond to our petition for a high-end compact Android smartphone.

Sony is targeting a mid-February release for the Z1 Compact, with an expected price point lower than the Z1 flagship but higher than other compacts due to its premium specs. Sony has also assured us that the Z1 compact will be part of the first wave of Android 4.4 KitKat upgrades, set for "several weeks" after launch.