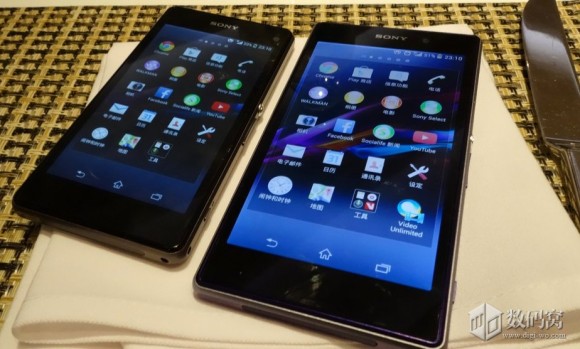 A juicy bit regarding the specs of the Sony Xperia Z1S came alongside the photo you seen above. Allegedly, the pocket-friendly Android powerhouse will feature an IPS display panel. Should the report pan out to be the real deal, the Z1S display is certain to be a massive improvement over the far from perfect TFT displays Sony currently uses.

The Sony Xperia Z1S is expected to bring the powerful internals and camera of the Xperia Z1 in a smaller form factor. It will swap the 5” display of the flagship for a 4.3” unit.

Previous reports have pointed that the Xperia Z1S might launch in late November.

Why is the notification bar transparent in both the phones? Is it because they have Android Kit Kat installed in them?

Of course because S4 mini is a flagship of Samsung in India(smh) One flagship(S4) and one phoneblet(Note 3) Sony? Had to release Z, Z1, Z1S to compete against S4 >but...but all those S4 variants Just different variants for different ...

Here in my country(Philippines). There are 2 to 3 variants of Galaxy S4 in one region. In Every rule there is an exemption.. :P