Sony is hard at work on its Xperia Z1 successor that should debut at the MWC in Barcelona next month. The alleged device is has the the codename Sirius, but should be called Xperia Z2 once it goes official.

Just e few days ago we saw high-res live pictures of the Xperia D6503 Sirius. Previous measures pointed to a 5.2" 1080p screen, while the new info (complete with screenshot) shows a 4.9" 1080p display.

The smartphone runs on Snapdragon 800 (MSM8974-AB chipset with a quad-core 2.3GHz Krait 400 CPU, faster Adreno 330 GPU and 3GB of RAM). At the back there's a 20.7MP camera with a larger than usual sensor, while Android 4.3 Jelly Bean with a newer version of Sony's home-baked launcher is under the hood.

So, the XDA user who gave us the first live pictures of the D6503 is now giving us some screenshots of Sony's new UI. Some rumors suggest the retail device will be running on Android 4.4 KitKat, but the one we are seeing today seems to be running on an older firmware build with Android 4.3 Jelly Bean. Still, the screenshots are enough to show us some of the changes coming with Sony's new launcher.

You can see the new icons on the Quick Settings page, the option for managing notifications from the Personalization menu and the new themes. If the XDA forum user decide to post even more shots, you bet we'll be adding them as well. 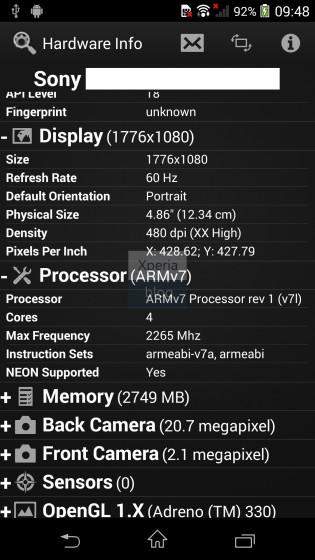 Hopefully we'll know everything about the Xperia Z2 and its new launcher in a few weeks when the MWC kicks off.

Thank you, xJokerz94, for the tip!

Inspirations or innovations from sony will always include the historical truth that it is Japanese. Alot of Japanese products are the result of studying already made products around the world and improving upon them. I love the style and funtional of...

Hi ! If your device Consumes more battery u can uninstall unused apps or u can do format factory Thanks

FIX BATTERY ISSUE - Guys please ensure, Battery issue to be fixed. Been using xperia Z1 and need Sony team to give us enough battery juice to carry through the day.