Sony is delivering on its promise dating back to October last year to bring Android Marshmallow to the Xperia Z2, Xperia Z3 and Xperia Z3 Compact. After a Beta build was released a month ago, users of the smartphones are starting to receive the official update.

The firmware, carrying a build number 23.5.A.0.570, brings the OS version to the latest 6.0.1, and includes the February Android security patch as well as the latest camera app interface. 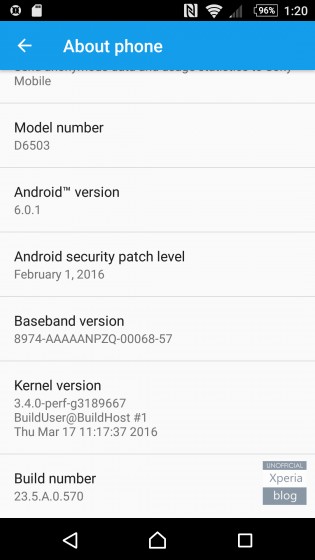 Now, there are the usual caveats, though. For one, only three models are getting the update for now, specifically the D6503 Z2, the D6603 Z3 and the D5803 Z3 Compact. Additionally, it's not yet happening in all parts of the world - so far it's the US, Russia, Ukraine, Middle East and North Africa, and perhaps Latin America.

So if you're holding on to your trusty Xperias of the above generations and live somewhere in these regions, you may be in luck. If not, muster some patience, it could be just a few days.

Anyone from Sri Lanka got the update for Z2?

I am facing a serious problem with OTG for connecting to pendrive after updating my Xperia Z3 to marshmallow from one month. You can view the file but can not do anything as transfer, etc. I am from India please help me solve this problem.

Just got the Marshmallow update over the air in Germany :-D