Xperia Z3 has its Lollipop update certified, may roll out soon

The Sony Xperia Z3 running Android 5.0 Lollipop has been certified by the Wi-Fi Alliance. The handset obviously already had been certified over there while running previous versions of the software - so this means we could see Lollipop rolling out to Xperia Z3 units worldwide soon.

You can see the certification notes in the screenshot below, which also reveals that the Xperia Z3 with Lollipop got the all clear just a couple of days ago. 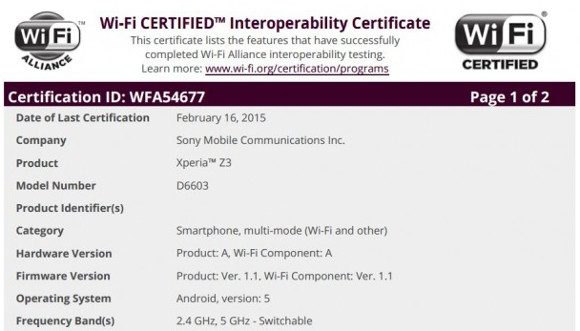 A release of Android 5.0 for the Z3 in a short while would make sense especially as the Japanese company itself promised this would happen in February. We're now past the half point of this month, and Sony's competitors have been faster with getting Lollipop to their flagship devices, so the company really needs to act sooner, rather than later.

The good news is that, slow as it may be, Sony's Lollipop rollout is set to include the entire Z line of tablets and smartphones. So if you own one of those, be convinced that an update is in the works - it may just take a while for it to actually be released, as it turns out.

Too late, to little