The Sony Xperia Z3+ measures 146 x 72 x 6.9 mm, which is exactly the same footprint as the Xperia Z3. Fractions of a millimeter have been trimmed off the thickness, 0.4mm to be precise. Sony is really proud it has achieved that without resulting in a protruding camera lens and indeed that's something. Both the iPhone 6 (6.9mm) and the Galaxy S6 (6.8mm) have one.

The difference in thickness between the Z3 and the Z3+ however is not readily noticeable in real life but we're sure it's there for the marketing department to peruse.

What is more tangible in practice is the decrease in weight. At 144g the new handset truly feels lighter than the Z3, more so than the 8g of difference would suggest. 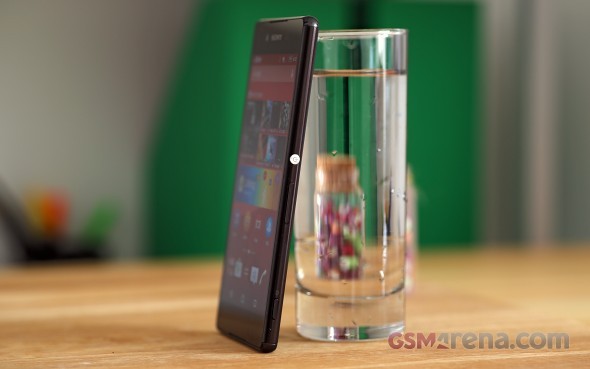 If you've ever spent time with a Sony Z-series smartphone in the past two and a half years, you know the basics of its design language, which the company calls Omnibalance. A rectangular two-sided glass slab encapsulated in a metal frame makes for a premium styling which feels equally nice to look at and handle.

Sony has gone with a slightly different frame material this time around. While it's still matte, it has a bit more shine to it. The bumper corners are still present and whether or not they provide additional protection in case of drops, they still hurt the overall appearance.

What is perhaps the most welcome design feature is the capless microUSB port. Apparently the IP68 certification for dust and water ingress could be attained without the hideous flap, which brought hassle to every charging session.

The workaround to that issue used to be the magnetic dock which attached to the left side of the device and delivered power via a pair of pogo pins. Well, with the easy-to-access microUSB port, those have now been deemed unnecessary and the result is a much more refined overall look with less distractions on the frame.

There is a downside to the new arrangement, but it will hopefully affect a small percentage of prospective users. The thing is, with the omission of the pogo pins having the Xperia Z3+ on a dock in landscape orientation is no longer possible. A new dock will be sold optionally, which positions the Z3+ in portrait mode and plugs into the microUSB port. As you could guess, that tends to block the bottom speaker. 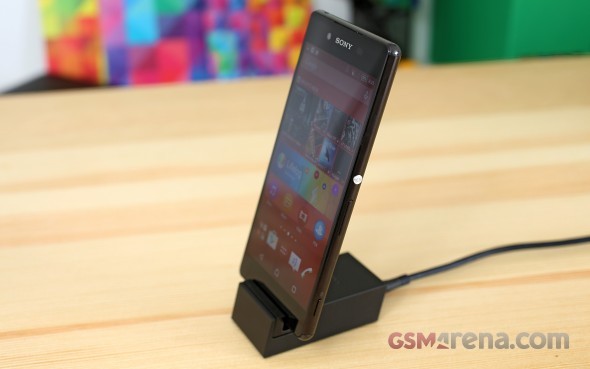 The speakers themselves mark a return to the Xperia Z2 in terms of placement. The relocation to the edges of the front means they are less obtrusive than on the Z3 and the front is now back to a solid glass panel with no cutouts.

Sony is keen to point out that their camera lens sits flush with the back despite the decrease in thickness, unlike pretty much every major competitor. An interesting detail is that now the lens is part of the glass panel, while the single-LED flash sits in a cutout, exactly the opposite solution to the previous model.

Looking at the back alone, you'd have to be a true Sony connoisseur to tell the Xperia Z3+ apart from the older models. We do have a Z3 for direct comparison so we admit that made our job much easier.

The controls of the Xperia Z3+ are located on the right side of the device. The aluminum circular power button, a highlight of the OmniBalance aesthetic, is joined by the volume rocker in the middle third of the side, while the dedicated two-stage shutter release button is in its natural position towards the bottom.

Right side with power button volume rocker and shutter release

What used to be two separate slots on the right for microSD and nanoSIM cards, hidden behind a long 33mm flap on the right, has become a single slot on the left, where the microUSB used to be.

Behind the single flap on the Z3+ there's a thin plastic tray which can hold the nanoSIM together with a microSD card.

SIM card and microSD slot behind a flap on the left

On the top of the phone you'll find the standard 3.5mm headphone jack in the same position as it was in the predecessor. For little apparent reason other than to move things around a bit, the secondary microphone has abandoned the 3.5mm jack and is now on the other end of the top plate.

What used to be a bare bottom plate is now home to the microUSB port in the middle and a lanyard eyelet towards the corner, an increasingly rare sight these days.

3.5mm jack and secondary mic on the top plate • microUSB and lanyard eyelet on the botom

A fairly standard arrangement on the front sees the 5MP camera and sensor cluster on either side of the Sony logo, mirrored compared to the previous three generations, and back to the roots of the original Xperia Z.

The 20.7MP camera is in the top left corner on the back, where it has been since the Z1, and so is the single-LED flash.

The Sony Xperia Z3+ is equipped with a 5.2-inch 1080p IPS display, which has the same specs as the one used in the Z3 but it's reportedly brighter. We'll leave detailed testing for later, but its sounds impressive on paper as the display in the Xperia Z3 already had excellent brightness and contrast scores.