True to its name, the Sony Xperia Z3 Tablet Compact is small, light, durable and powerful. Hardly a surprise to anyone who's been watching Sony lately. Two generations of mini superphones saw the Z Compact series become the benchmark for design excellence and flagship-worthy performance. Keen to keep the momentum, Sony is bringing the same game to tablets. 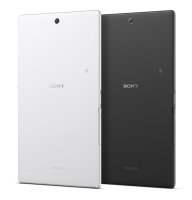 Apple's lukewarm iPad mini 3 announcement this year is leaving the field wide open for the likes of the Z3 Tablet Compact and the HTC Nexus 9. Sony's player is unmatched among 8" tablets in how thin and light it is. To put things in perspective, it's thinner than an iPhone 6 and it weighs a measly 270g - mightily impressive when you consider we've handled phones such as the Oppo N1 or the Lumia 1520 that are well over the 200g mark.

In keeping with the Xperia Z tradition, the Sony 8-incher is dust tight and water resistant, a card-carrying member of the IP68 club. And it has front-facing stereo speakers. That's its third advantage over your run-of-the-mill tablet, if you are keeping count. Here are the rest of the ups and downs of the Xperia Z3 Tablet Compact.

As usual, Sony uses its own display panels - after years of TV manufacturing that's no surprise, but WUXGA resolution (the 16:10 cousin of 1080p) is a little thin for late 2014. Even the barely-upgraded iPad mini 3 has more pixels per inch, while the Galaxy Tab S 8.4 (another slim and light Android tablet) has nearly 80% more pixels on its Super AMOLED screen.

But that's a topic for the chapters to come. For now all you need to know is that Sony used a fast Snapdragon 801 chipset that runs Android 4.4 KitKat but Sony has already committed to an Android 5.0 Lollipop upgrade. The Xperia Z3 Tablet Compact is the first to feature Remote Play - it lets you stream PlayStation 4 games to the tablet that you control with a DualShock 4 controller, there's even a dedicated mount that attaches the tablet to the controller.

Sony presses on with the inherent advantages of a multi-platform tech giant. A Walkman music player is paired with advanced sound processing and front-facing stereo speakers. The Triluminos LCD with X-Reality processing is, Sony claims, the brightest it has made yet.

While Sony likes to lean on tried and true brand names, the company does put an admirable effort into making its devices future-proof. The 3GB of RAM is a great start, the microSD card slot lets you add storage on the cheap, MHL 3.0 and Miracast do TV-Out with and without a cable and, of course, that IP68 rating makes the Xperia Z3 Tablet Compact suitable for care-free bathtub and kitchen use.