Following yesterday's leaked official photo of the Xperia Z (formerly residing under the Yuga moniker), we now have the purported price tag that the device will carry. 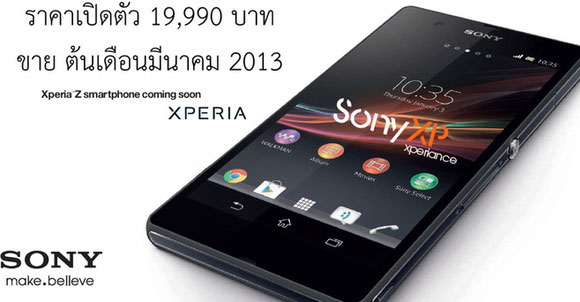 According to Thai blog SonyXP, the SIM-free version of the Xperia Z will be selling in Thailand for as much as 19,900 Thai Baht off-contract. This converts roughly to an price of $655. The price will definitely vary from market to market, but this information certainly sets the tone for the Xperia Z' pricing.

Naturally, the information isn't anything close to official just yet, but we believe there's some authenticity to it, considering we haven't seen this particular Xperia Z photo before.

The Sony Xperia Z will enter the arena with other phones with 5” 1080p screens this year but it also puts Sony into the quad-core race with its Qualcomm APQ8064 Snapdragon S4 Pro chipset. The Z will come out with Android 4.1 Jelly Bean at launch.

The phone is rumored to become available some time in March. However, expect more official information on the Z once CES 2013 kicks off.

it is very nice phone

where we can buy this phone here in thailand?

this is something beyond technology.I would sell my life to get this phone,Nice job SONY.