We've kept the best of the hardware tour till last. The Xperia Z Ultra comes with a 6.4" 1080p Triluminos display, backed up by the company's X-Reality engine. Sony are keen to show that there's nothing holding the screen back this time around. 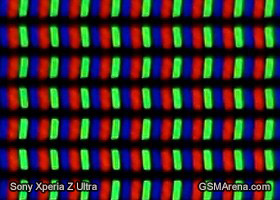 The pixel density breaks down to 344ppi, which isn't quite as good as 1080p on a 5" diagonal that became the flagship standard this year, but it's still sharper than the iPhone 5's Retina display. You'd need to look from way closer than comfortable to spot the sharpness difference between the Xperia Z Ultra and the Xperia Z.

The Triluminos display is quite impressive

What you will notice far more easily is the improvement in viewing angles, which have been the Achilles' heel of the Sony smartphone screens lately. This time the viewing angles are quite wide, with color shift and contrast loss only spotted at extreme tilt. It's not quite as perfect as the HTC One LCD panel for example, but at this point the difference is only marginal. Great job!

The native contrast of the Sony Xperia Z Ultra display is great with colors nicely rendered. If you'd like a bit of extra punch to your images and videos you should enable the X-Reality engine, which is the successor of the Mobile Bravia Engine. It aims to improve sharpness, reduce noise, while also boosting contrast and saturation and it does a pretty decent job of it.


Unfortunately, the Xperia Z Ultra's screen is fairly reflective, so it only managed an average score in our dedicated sunlight legibility test. The phablet is decently usable in bright sun, but it's not the best experience.

All things considered, the Sony Xperia Z Ultra certainly has the best screen on a phablet at this point. The sheer size and the resolution advantage, combined with the decent to great performance in all other important aspects, see the Z Ultra inch ahead of the LG Optimus G Pro.

The Sony Xperia Z Ultra is impressively thin at 6.5mm but such vanity usually comes at the expense of the battery. Still, a 3,050mAh doesn't sound too bad, especially when you consider that the Snapdragon 800 is supposed to improve overall power efficiency compared to the Snapdragon 600. There's still that massive 6.4" screen to power up though. 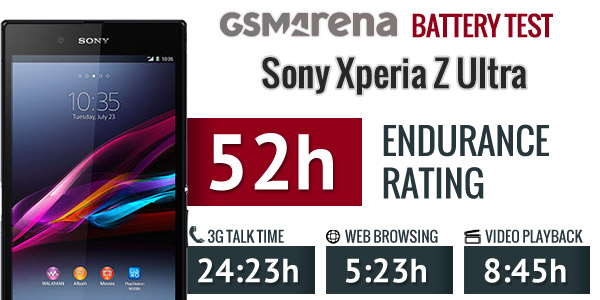 When it's off, the Xperia Z Ultra easily comes close to the top of our talk test chart with about 24 and a half hours. However, web browsing was dismal at about 5 and a half hours and video playback was just okay at a just under 9 hours.

That's not so good as we guess the Z Ultra will be used a lot more for web browsing and watching videos than talking. Still, we gave an even weight to all three disciplines and came up with a rated battery life of 52h, given you use the phone for one hour of talking, one hour of web browsing and one hour of video playback per day and leaving the phone in standby for the rest of the time.